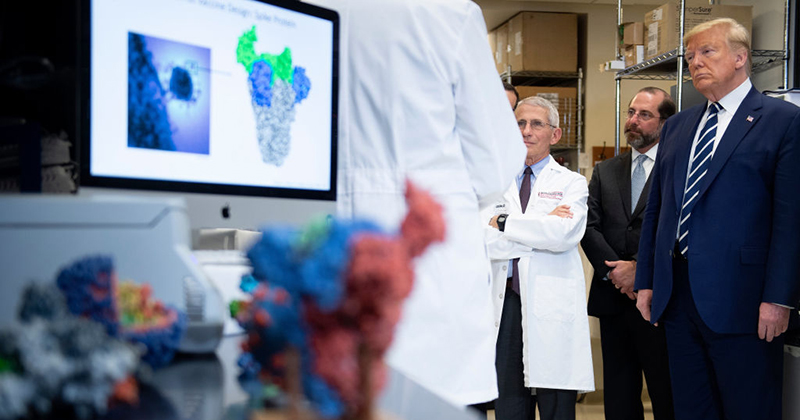 President Trump donated his fourth quarter salary to the Department of Health and Human Services this week in an effort to help fight the Coronavirus, but leftists are angry about it because…  Orange man bad.

The donation of $100,000 is part of Trump’s promise to never take any salary while he is President. He has previously given away his salary to the Surgeon General’s office, border enforcement, and Veterans’ Affairs, to name but a few.

President @realDonaldTrump made a commitment to donate his salary while in office. Honoring that promise and to further protect the American people, he is donating his 2019 Q4 salary to @HHSGov to support the efforts being undertaken to confront, contain, and combat #Coronavirus. pic.twitter.com/R6KUQmBRl1

The move was no where near good enough for leftists though, who immediately compared the move to Hitler (an obvious starting point):

Hitler never took a salary. Now show his tax returns and document the millions he's rinsed the tax payer for in terms of staying at his own properties, golf carts, and security for Eric.

This one was furious that the Orange man’s salary would only pay for 50 coronavirus tests:

This pays for tests for less than 50 people.

Presumably she has donated more money?

This one called it a ‘drop in the bucket’ and got angry about Trump owning property:

REMINDER: Trump's salary is a drop in the bucket compared to the money businesses, politicians, and foreign governments are funneling into properties he still owns and profits from while in office https://t.co/xhm32mkB6O

In an important counterpoint, these leftists want to know how “we” get back money Trump has spent on golfing:

This one flat out denied that Trump is donating anything. The proof? The check is dated January 29th:

Trump’s @PressSec is trying to convince us that @realDonaldTrump is donating his salary to fight Coronavirus. But the check is dated 01/29/20? 😅 They’re so stupid. https://t.co/YByRZjW0s4

Who’d have thought Trump could do something before announcing it?

And this one repeated a fake narrative spread by Democrats that Trump defunded pandemic response:

This will really make up for the global pandemic Obama programs Trump dismantled, his defunding of pandemic response, bungled test kits, and golf outings that have cost more than 334 years of presidential salaries. https://t.co/Z3D1G3KY4A 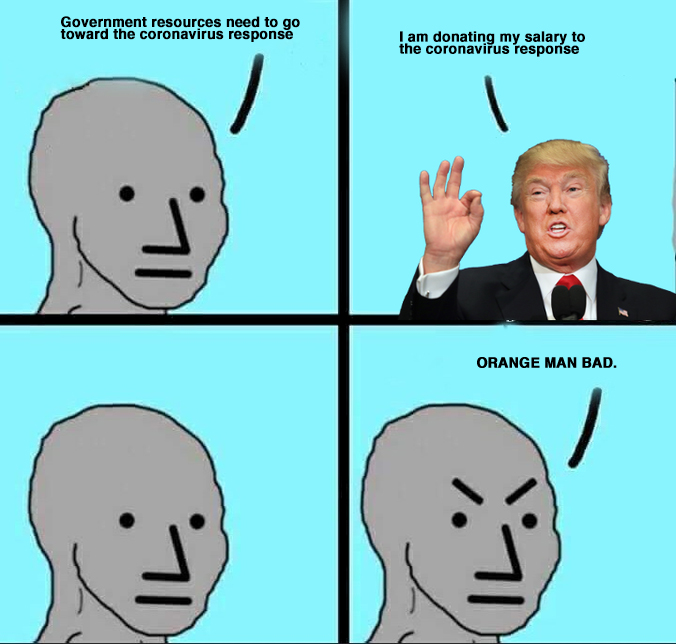 In reality, Trump is pushing pharmaceutical companies to accelerate a vaccine for the coronavirus, and working closely with the CDC to contain the outbreak.

The National Institutes of Health is home to some of the greatest doctors, scientists, and researchers in the world. Thank you for all your doing @NIH, keep up the great work! https://t.co/lzgha7jRw1 pic.twitter.com/oLi8HbSzlY

In addition, Trump presided over enhanced border controls and blocking flights from infected areas weeks ago, while Democrats did nothing:

So, the Coronavirus, which started in China and spread to various countries throughout the world, but very slowly in the U.S. because President Trump closed our border, and ended flights, VERY EARLY, is now being blamed, by the Do Nothing Democrats, to be the fault of “Trump”.

The Do Nothing Democrats were busy wasting time on the Immigration Hoax, & anything else they could do to make the Republican Party look bad, while I was busy calling early BORDER & FLIGHT closings, putting us way ahead in our battle with Coronavirus. Dems called it VERY wrong!