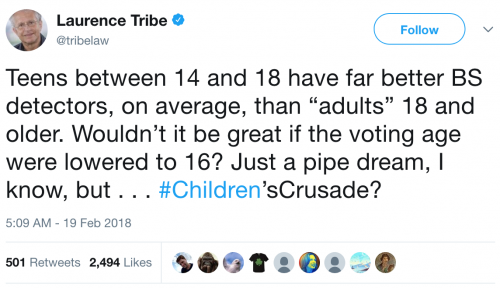 Leftists are calling for a “children’s crusade” to force gun control measures in the United States as the mainstream media and globalists shamelessly politicize the tragedy of last week’s horrific school massacre in Parkland, Fla.

Use of the hashtag #ChildrensCrusade is growing on Twitter, in conjunction with calls to lower the voting age to 16.

Both ideas are being promoted by the mainstream media and prominent leftists, like Laurence Tribe – a Harvard Law professor and fervent anti-Trumper.

“Teens between 14 and 18 have far better BS detectors, on average, than ‘adults’ 18 and older. Wouldn’t it be great if the voting age were lowered to 16? Just a pipe dream, I know, but . . . #Children’sCrusade?” Tribe tweeted.

“A national ‘Children’s Crusade’ of marches and protests against gun violence following the Parkland shooting is reviving the dimmed hopes of gun control advocates that progress can be made on the heated political issue,” the Herald reported. “At a press conference in the basement of the Hibernian Hall in Roxbury, U.S. Sen. Edward J. Markey said the country is ‘at the dawn of a Children’s Crusade’ that provide a breakthrough in the perennially stalled push for new gun regulations.”

Concurrently, CNN published a piece titled, “Parkland students show why 16-year-olds should be able to vote.”

The article, written by another professor of law and shrill anti-Trumper, Joshua Douglas, asserts that the student activists who have emerged from the Marjory Stoneman Douglas High School shooting are “the real adults in the room,” and goes on to make his case for lowering the voting age.

“It’s hashtag hokum from a pair of pandering left-wing profs exploiting a new round of Democratic youth props,” Malkin writes. “This is not compassion, but abdication. America is not a juvenilocracy. It is a constitutional republic.”

Use of the ‘Children’s Crusade’ branding has invited an intriguing conversation on the matter, as the original Children’s Crusade ended very poorly the first time it was attempted, back in the 1200’s – a fact which many Twitter users have cited in rebuking Tribe and his fellow travelers.

A detailed account of the Children’s Crusades can be found in this excerpt from A History of the Crusades, which has been published at HistoryGuide.org.

In a nutshell, multiple groups of several thousand young Europeans felt it was their Christian duty to retake Jerusalem from Muslim invaders, subsequently traveling great distances in an attempt to reach the Holy Land and do battle. Many youths either died along the journey or gave up, and some who managed to secure boat rides across the Mediterranean Sea were eventually sold into Islamic slavery, never to be seen again.

It’s interesting to note that an entry at Britannica.com regarding the Children’s Crusades saw its first revision since 2009 on February 9, 2018 – mere days before the Parkland catastrophe.

In the article’s edit history, it is reflected that Britannica recently struck the HistoryGuide.org article as being “invalidated.”

In another strange coincidence, Facebook users are now being prevented from sharing the same link from HistoryGuide.org. Facebook has deemed the website to be “spam” and is mysteriously hiding comments featuring it, leaving some to wonder if the powers-that-be are attempting to flush this information down the memory hole for some reason.

It remains to be seen where this new “Children’s Crusade” might lead, but the historical precedent does not bode well for the possible outcomes.

The fact that grown adults have been swept up in a hysteria ‘spearheaded’ by children speaks volumes to the idea that leftism is a mental disorder.

“I will make boys their officials; mere children will govern them.” – Isaiah 3:4#ChildrensCrusade #CNNTownHall #MarchForOurLives pic.twitter.com/WeCyKfqs9r