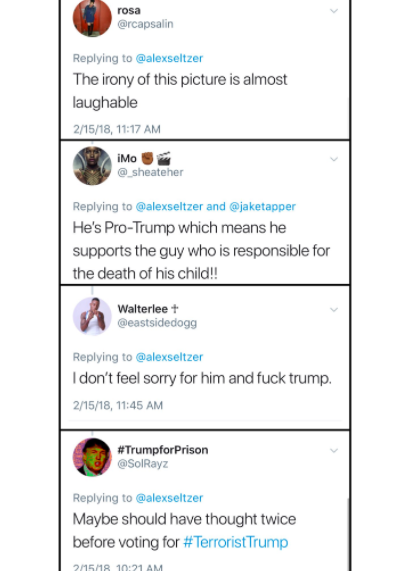 Anti-gun liberals are attacking a father who lost his daughter in the Parkland, Florida school shooting after he was pictured in a Trump 2020 t-shirt.

Andrew Pollack and his wife were interviewed by a local news outlet while they waited outside Broward Health North hospital, hoping to hear from their daughter Meadow who was a senior at Marjory Stoneman Douglas High School.

Actual responses to a man whose daughter was murdered in the Florida school massacre. Why? Because he voted for Trump. Some people are sick pic.twitter.com/9jUmHH1wFJ

Pollack never heard from Meadow, who was announced dead, and to add insult to injury he was berated online for being a Trump supporter.

Im glad she died. I feel bad for the others. That's what he gets!

I feel empathy for his daughter – but not him.

How does this father that lost his daughter in a school shooting wear a NRA backed Trump shirt?? How, how??? https://t.co/GkdEMqOwIa

I’m unforgiveable, but it’s a little hard to feel sorry who supported this administration and its racist and its NRA supporting policies. I feel sorry for daughter,but not for him. He probably doesn’t make the connection behind his Party’s policies and what happened to his child

Maybe should have thought twice before voting for #TerroristTrump

Sorry for his daughter but wearing a shirt for a politician who will do absolutely nothing in response to his daughter’s death is very ironic.