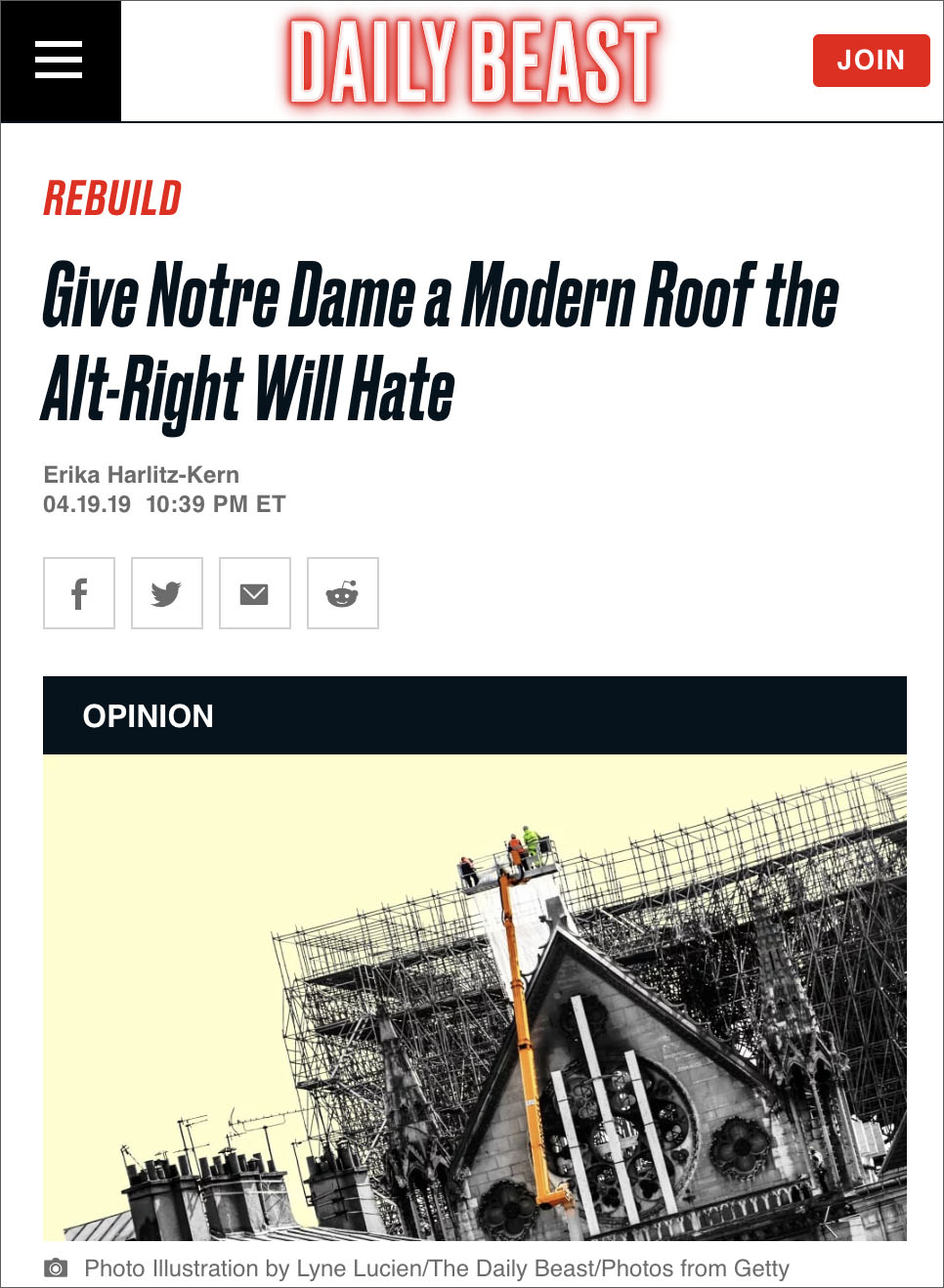 Leftists have begun calling for the destroyed Notre Dame cathedral’s roof to be rebuilt with a modern “brand new design” to upset conservatives.

In an article entitled Give Notre Dame a Modern Roof the Alt-Right Will Hate, Daily Beast writer Erika Harlitz-Kern claimed Notre Dame represents a part of “white” Western Civilization, and therefore must be altered to reflect a global society.

“If you ask me, in honor of Notre Dame’s history, the new roof needs to be a brand new design, representative of today and not of the past,” Harlitz-Kern wrote Friday.

“In the eyes of those who promote the ideas of Western civilization and so-called Judeo-Christian values, the Middle Ages stand out as the ideal time period when Europe was a white society united in a homogenous Christian culture led by one single Christian institution.”

Harlitz-Kern said Western Civilization is actually not a European phenomenon, but the result of global influences.

“Such a view of the Middle Ages is inaccurate. In fact, what is considered to be European culture, in the past and today, is an amalgamation of impulses from all over the world.”

She then praised French President Emmanuel Macron’s government for holding a globalist competition for architects to present their modern design ideas for Notre Dame’s roof and spire.

“An acknowledgement of Notre Dame as the result of worldwide impulses across the centuries can be found in the French government’s decision to put out a global call for architects to participate in a competition to rebuild Notre Dame,” she wrote.

Prime Minister Édouard Philippe said the competition presents an “evolution of heritage” should they decide to modernize the 850-year-old church.

“The international competition will allow us to ask the question of whether we should even recreate the spire as it was conceived by Viollet-le-Duc,” Philippe said. “Or, as is often the case in the evolution of heritage, whether we should endow Notre Dame with a new spire. This is obviously a huge challenge, a historic responsibility.”

French conservatives, such as Marine Le Pen, expressed their outrage at the French government’s plan to modernize Notre Dame.

“Hands off Notre Dame!” she tweeted in French Thursday.

The left’s calls to alter Notre Dame shouldn’t be a surprise given they have no respect for history, especially if it’s related to “white” history, as evidenced by their desire to tear down Confederate statues, and even monuments of America’s founders like Thomas Jefferson and George Washington.

Although many people were recorded celebrating the Notre Dame fire online, the MSM is pushing the false narrative that conservatives are creating fake news. Paul Joseph Watson reveals the truth according to the facts as they unfolded.