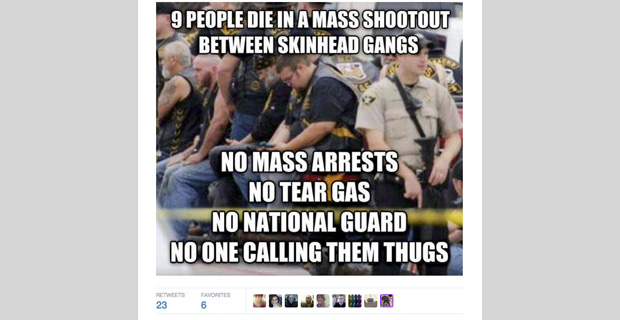 Leftist “social justice warriors” are blaming “white privilege” for the lack of National Guard troops on Waco, Texas, streets in response to the gun battle between rival biker gangs and police which left nine dead on Sunday.

Despite the fact the police were already monitoring the gangs at the Twin Peaks restaurant before the shootings, which entirely took place at the restaurant, not Waco at large, and likely lasted only minutes, social justice warriors are using the #WacoThugs hashtag to complain about how the city isn’t under a complete lockdown with curfews and National Guard troops patrolling the streets.

In other words, leftists are actually promoting a police state in the name of equality. 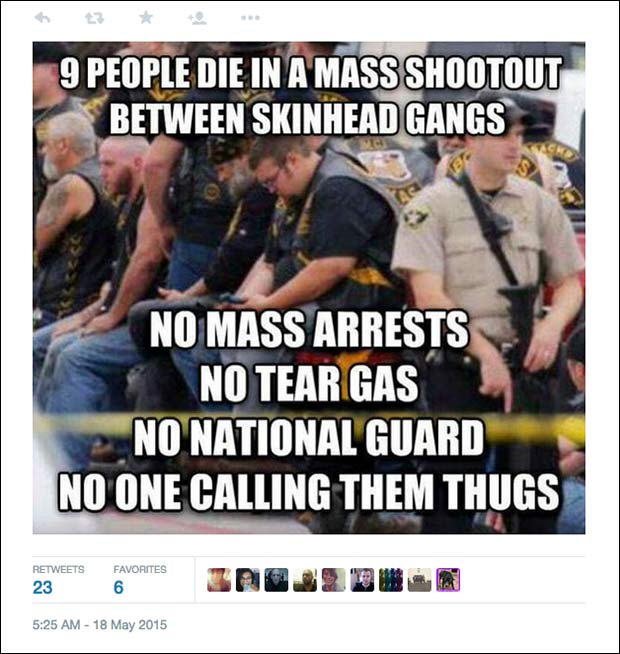 “Nine people die in a mass shootout between skinhead gangs: no mass arrests, no tear gas, no National Guard and no one calling them thugs,” one meme circulating on Twitter stated, despite the fact that 192 bikers are now facing charges related to the shootings.

You read that right: no National Guard at Twin Peaks = racism!

Others claim the Guard should have been deployed.

@DynaMoChen they do need the National Guard for this. They found hundreds of weapons. @NationalGuard @FBI Quantico where you at #WacoThugs

“They do need the National Guard for this; they [Waco police] found hundreds of weapons,” Madelyne O. tweeted.

Another person said she was concerned about the lack of troops in Waco.

So #WacoThugs may have 100+ guns…9 people already dead…yet no Guard & no State of Emergency. All jokes aside, I am concerned.

“So Waco thugs may have 100+ guns, nine people already dead, yet no Guard and no state of emergency,” Kim M. tweeted. “All jokes aside, I am concerned.”

As if erasing the line between law enforcement and the military would stop police brutality and the loss of our rights, but hey, it’s all in the name of social justice, right?

Another Twitter user even blamed the shooting on “white privilege.”

“[The] Twin Peaks shooting is indicative of how #WhitePrivilege is allowed to perpetuate violence and criminality in Texas,” Bacchus tweeted.