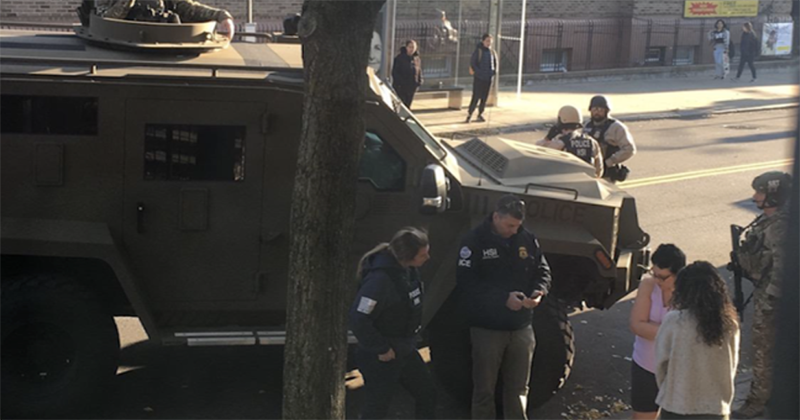 The sight of an armored vehicle in Queens last week belonging to a branch of ICE had leftists all in a spin, as some suggested, wrongly, it was there as an ‘occupying force’ to arrest illegals.

The armored personnel carrier, (not a tank) surrounded by ICE agents, and even a gunner, was seen on Forest Avenue near Norman Street in the Queens neighborhood of Ridgewood.

The Ridgewood Tenants Union, a leftist organization, freaked out without checking the facts first:

ICE is literally rolling through Queens in armored personnel carriers like an occupying force. https://t.co/2mFB5LBSx9

They even accused ICE of inspiring terror:

“People feel terrorized,” said Raquel Namuche, an organizer with the Ridgewood Tenants Union. “This happened right across from a youth program for children as young as four-years-old and there seemed to be no safety protocols in place. For people to leave their homes early in the morning and see a tank out on the street is just wild.”

It’s to stop federal law enforcement from being shot and killed by dangerous criminals.

Gothamist noted that the vehicle was used in an operation to arrest a man suspected of smuggling and illegally selling weapons:

An ICE spokesperson confirmed that one individual was taken into custody on an unspecified criminal arrest warrant. A spokesperson for Mayor Bill de Blasio said the agents were there as part of a federal investigation into a firearms suspect, who was allegedly found to have been hoarding “about 50 guns, including a machine gun, gun parts and ammunition.”

The snowflake freak out didn’t end there, however:

Councilmember Antonio Reynoso also expressed frustration about the incident, pointing to constant fear in immigrant neighborhoods about the potential for raids and deportations. “I do not understand what necessitated ICE’s use of a tank other than the simple desire to instill fear amongst our community members,” he said in a statement to Gothamist. “At this time, we must ensure that residents are connected to resources like the Immigrant Defense Project so that they are equipped to know their rights against ICE.”

It’s not a fucking tank.

It wasn’t being used to arrest illegal immigrants.

Put down the Twitter and take a walk outside.