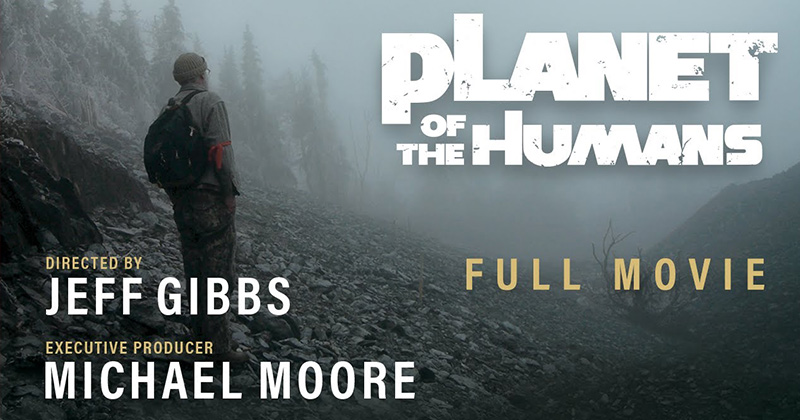 Executive produced by activist and filmmaker Michael Moore, 21stCentureWire.com points out that the new documentary Planet of the Humans, dares to say what no one else will say on this Earth Day – the leading ‘green’ environmental activists, including Al Gore, have taken their followers down the wrong road – selling out the real environmental movement to some of wealthy corporate interests in America and the world.

This film is the wake-up call to the reality we are afraid to face: the mainstream environmental movement is pushing lies in the form of various techno-fixes and band-aids – all of which are reliant and use large quantities of fossil fuels and rare earth minerals. Have environmentalists fallen for a “green” illusion? More than any other documentary to date, this film exposes the wholesale fraud behind subsidized industries like biomass fuels, wind turbines, and even not-so ‘green’ electric car…

…and that is why Moore’s typical leftist cult following has turned on him so aggressively – facts don’t fit their narratives and cognitive dissonance is not a safe space.

In fact, as 21stCenturyWire.com reports, ever since Moore released the new documentary, leftwing green activists have leveled a furious attack against the filmmaker for daring to blow the whistle on the “green energy scam.” Moore, a hero of the political left, has now cast serious doubt over the efficacy of ‘renewables’, including solar and wind energy. Incredibly, many green groups and political operatives are now trying to get the film banned.

A recent report from Sky News in Australia talks about how the new film presents a number of inconvenient truths.

As VoxDay notes, who would have expected Michael Moore would take on one of the biggest shibboleths of the Left, the so-called Green movement and its massive globo-corporate charade of “renewable energy”:

Examples include a zoo that claims to power itself on ‘renewable’ elephant dung but only produces enough to heat the elephant house.

They film a supposedly solar-powered music festival that quietly plugs into the grid and a similar arrangement at General Motors’ HQ at the launch of a hybrid, plug-in car, where the electricity grid powering the vehicle is ’95 per cent’ fed by coal.

The film also takes issue with solar panels, highlighting their limited shelf-life and that they are made from non-renewable quartz and coal.

In another sequence, joshua trees are chopped down in California so a huge solar facility can be built.

Moore’s documentary is particularly damning of ‘biomass’, the supposedly-renewable energy created by burning organic matter. The film shows huge piles of trees that have been chopped down to feed a power plant, its chimney belching out smoke that appears far from environmentally sound.

Viewers are told biomass is the biggest single source of renewable energy around the world, and – nonsensically given it is supposed to be about energy conservation – has involved wood chips being shipped to Europe from North America, Brazil and Indonesia.

‘Our anxiety over [global] warming has panicked us into embracing anything green or alternative without actually looking too closely at what is involved,’ the film states. With plans to turn animal fat into biomass fuel, the film asks: ‘Is there anything too terrible to qualify as green energy?’

The film suggests that mega-rich businessmen – including Sir Richard Branson and British timber investor Jeremy Grantham – and banks such as Goldman Sachs – are keen to invest in green energy because they want to make a quick buck rather than because they are worried for the planet. According to Moore, Toyota, Citibank and bulldozer giant Caterpillar becoming sponsors of Earth Day provided final confirmation that Big Business has taken over the green movement.

When they had picked their jaws off the floor, the first response from some of the climate scientists and environmental campaigners who have been enthusiasts for renewable energy delighted their opponents – they wanted to ban it.

Finally, while this documentary is groundbreaking in the sense that it is one of the first ever comprehensive exposures of the environmental fraud which underpins ‘sustainable energy’ and the much celebrated Green New Deal, we note 21stCenturyWire.com’s warns that towards the end of the film director Jeff Gibbs veers into extremist ‘depopulation’ rhetoric, and infers that a radical social engineering agenda must be pursued in order to achieve population control – which he believes will somehow stop a ‘human-caused extinction event’ due to man-made CO2-induced ‘climate change.’

Putting aside that radical ideological segue by Gibbs, on balance, the film remains a powerful piece of investigative journalism which goes a long way towards challenging the green orthodoxy on widely held assumptions surrounding ‘green’ energy and sustainable development – which is crucial in advancing a fact-based discussion on how the world will realistically meet its energy needs in the future, as well as shining a light on the transnational profiteers who are pushing Wall Street’s ‘Green New Deal’ speculative energy market.