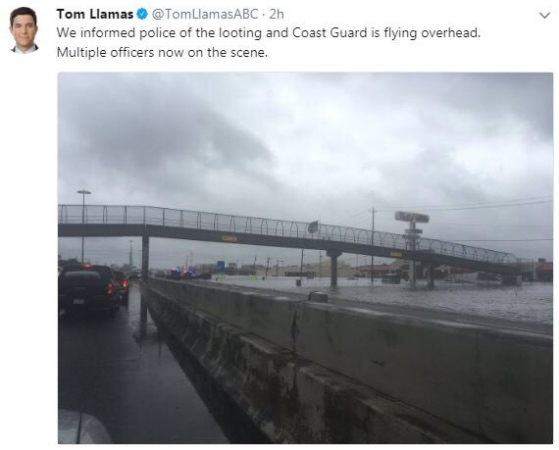 An ABC News reporter was attacked on social media Tuesday after reporting looters to police, as Tropical Storm Harvey continued its rampage.

Correspondent Tom Llamas was slammed as a snitch after claiming he “informed police of the looting” witnessed taking place at a nearby Houston, Texas, supermarket.

“We informed police of the looting and Coast Guard is flying overhead. Multiple officers now on the scene,” Llamas had tweeted.

Llamas was later forced to delete his tweet and issue a clarification, saying his team was “w/police who had discovered a dead body & mentioned we saw ppl w/faces covered going into a supermarket nearby.”

Let me clear this up–we were w/police who had discovered a dead body & mentioned we saw ppl w/faces covered going into a supermarket nearby pic.twitter.com/bfM5WCCO1e

But upon learning Llamas had condemned the looting, Twitter jumped to the criminals’ defense, with many assuming starving people were merely obtaining food.

“Looting a supermarket in a flood is also known as getting food,” North Carolina Democrat lawmaker John Burns said.

Looting a supermarket in a flood is also known as getting food.

So, in your #BREAKING announcement, hungry folks looting food (aka survival) takes precedence over the discovery of a body?

Tom why did you call it looting?

And now you know why they covered their faces, so some jackass wouldn’t report them for getting food supplies

You’d be taking food too if you were starving. @ABC sure knows how to pick the most sadistic, inhuman creatures on this planet. #Harvey #Abc

Now just get GTFO of there. #Harvey @abcnews @ABCNetwork pic.twitter.com/ljcyZzsLET

MarketWatch also chimed in with a snarky attack aimed at Llamas, saying, “No families struggling for a bag of soggy Wonder Bread on Llamas’s watch.”

One video shows people breaking into a business, with another showing men stealing money from a cash register.

Looters smashed what I assume was a car into a local @TMobile store. I just don’t understand. Smh ‍♀️ #HurricaneHarvey #HTXfloods pic.twitter.com/2AX0DsMfFk

Another group of men were witnessed walking away from businesses with stolen flat-screen televisions — hardly survival gear.

“We’re holding in there,” he said. “The looting’s starting. They took my dad’s truck and stole it, and they ran into a CVS to try to steal an ATM last night. So the looting has started. People don’t understand. There’s another part. The flood is one thing, and then the chaos and the anarchy and the craziness and the people just desperate to steal. To survive is going to be another issue.”

Police say they’ve caught up to 14 looters in the last 48 hours, including armed robbers who were ransacking a neighborhood, and others who broke into a GameStop.

“Burglarizing a home would normally bring a penalty of two to 20 years in prison, but now brings five years to life,” reports ABC13.com, noting a Texas law targeting disaster areas.

Looters and thieves who prey on closed businesses and homes should be on notice that they will be arrested and prosecuted.

“Anyone who tries to take advantage of this storm to break into homes or businesses should know that they are going to feel the full weight of the law,” Harris County District Attorney Kim Ogg stated. “Offenders will be processed around the clock without delay.”

Some people thought they’d loot and find themselves in jail thanks to the men and women of @houstonpolice.

The Houston Police Officers’ Union also gave a “shout out” to looters who disrupted rescue operations.