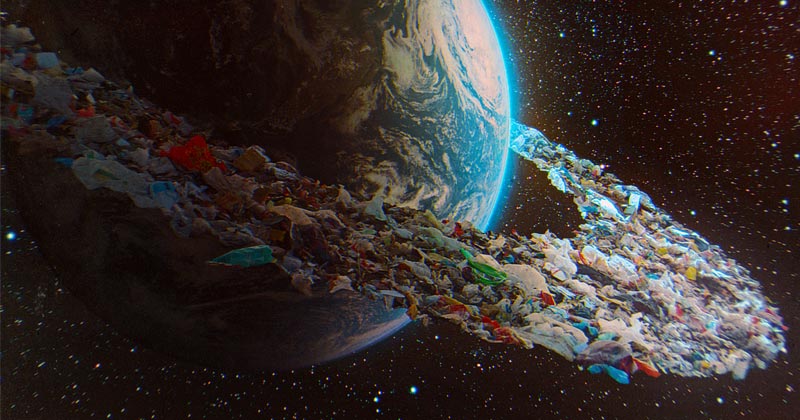 It’s mind-boggling to think about anything in terms of infinity.

Space spans all directions and has been expanding since the dawn of the universe. However, even though it’s boundless, space as a resource is not as infinite as it’s been made out to be.

Near-Earth space is becoming cluttered with objects, whether that be probes sent by different governments vying for dominance, or test equipment launched by a growing number of commercial companies. Within the next five years, U.S. companies alone are planning to send 15,000 satellites into space.

The areas of space most readily accessible to us are becoming more limited, and it all boils down to the fact that people fail to recognize near-Earth space as a finite resource.

“Outer space may be infinite, but the region of space around the Earth where we put stuff is very limited,” said Moriba Jah, an associate professor of aerospace engineering at the The University of Texas at Austin’s Oden Institute.

According to him, if we’re not careful and ignore long-term sustainability, our satellite communications, security infrastructure and even the future of space exploration are all at risk.

Jah is an expert on astrodynamics, the movement of objects in space. He is also an expert on space debris, and he believes that to protect the future of our planet, we need to guard near-Earth space and educate the public and policymakers about space sustainability.

Jah’s journey to becoming an expert on space clutter started while serving in the Air Force after he graduated from high school. He says he recalls looking up into the sky while doing guard duty at night and seeing for the first time an obstructed view of the universe.

“I’d look up and I’d see these dots of light crossing the skies. What is that? It’s not a plane. It’s not a shooting star,” he said. “I realized that it was human-made stuff orbiting the Earth. And I was just able to see it with my naked eye. It planted the first seed of curiosity in my mind.”

Jah went on to work for NASA’s Jet Propulsion Laboratory as a spacecraft navigator, serving on missions including the Mars Odyssey, Hayabusa and the Mars Reconnaissance Orbiter. He begin observing space debris extensively while working at the Air Force Research Laboratory on Maui, Hawaii, where he used optical data to record space object trajectories.

Today, Jah recognizes the severity of the problem of space trash and advocates for the regulation of space traffic, working to mitigate the increasing amount of human-made things in space and encouraging governmental and commercial space agency collaboration and transparency. Jah even provided expert testimony to Congress twice, once in 2017 and once just this month!

To understand how serious the problem of space debris is, Jah says we need to first understand how near-Earth orbit acts like highways for these resident space objects. In other words, near-Earth space contains limited lanes where satellites most naturally fall into orbit.

As objects are continually launched into space, things are beginning to interfere with these paths, putting our working satellites in danger.

These satellites are used for critical services such as telecommunications and national security, but we also rely on them to gather information for important decision-making about agriculture, meteorology, climatology, and more.

What if you were unable to access the internet due to something colliding with a satellite? Or meteorologists were unable to forecast the weather or an impending hurricane? Or worse, what if a plane were to lose its geographical positioning or communications systems midflight? These are real concerns that are looking more and more likely with the influx of objects in space.

It’s also important to recognize that most things put into space never come back or remain in orbit for well beyond our lifetimes.

NASA estimates 500,000 human-made fragments, from the size of a speck of paint to a whole school bus, orbit Earth today. These can be anything from retired satellites and old space probes to their deteriorating parts and pieces such as nuts, bolts and solar panel fragments.

Each piece of space debris can also collide with other objects at speeds faster than a bullet. This means that the population of space debris is self-growing as more things collide and break into even smaller pieces.

Each country maintains an independent catalog of items, oftentimes keeping information isolated and difficult to access. To mitigate this, Jah and his research team at UT created ASTRIAGraph, the world’s first crowdsourced space traffic monitoring system. It is a transdisciplinary, online tool accessible by anyone to find information about space trash.

“We just want to make space transparent and predictable,” Jah said, but in the end, prevention is key. He believes that all people should treat space like scouting a campground—taking their trash with them when they leave.

“Instead of thinking about ownership of some environment in terms of exercising rights, think about it in terms of custodianship, stewardship and mutual respect,” Jah said.

“Certain principles are common amongst all these indigenous people. Things like before you make any decisions in an ecosystem, gather lots of empirical data, understand the relationship between all these things. That’s where I’m going with space sustainability, and that’s why I think the work that we’re doing here at UT is unique,” he said.

Even with all its challenges, Jah is hopeful for the future. Working with the Robert Strauss Center for International Security and Law, Jah recently started the Space Security and Safety Program. This month, the program is partnering with the International Academy of Astronautics to hold its first annual conference on space traffic management right here at UT.

According to Jah, space debris is something that leaders in science, technology, law and social sciences all have to come together to solve, and he believes that UT Austin could be at the forefront of that change. To Jah, the combination of UT Austin’s ample resources, world-class leaders in a variety of fields and transdisciplinary approach to problem-solving distinguishes UT Austin from other top research universities.

“I want to have the Hogwarts of space safety, security and sustainability, and that makes sense to happen here at UT,” Jah said.

Space should remain limitless, and he hopes raising awareness will develop conscientious-minded individuals that will keep space clean, free and usable for generations to come.