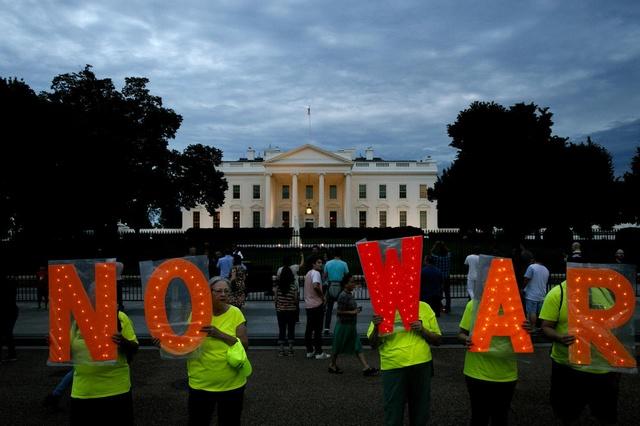 Well, perhaps Trump is now realizing there was that little thing called the Joint Comprehensive Plan of Action (JCPOA), or commonly the Iran nuclear deal, which he tore up in May 2018 — and that it really wasn’t so bad compared to the current array of “bad options”.

President Trump said Saturday that he would be Iran’s “best friend” and that it could be a “wealthy” country if it renounced nuclear weapons, according to the AFP.

So we’ve gone from missiles being readied, ships about to launch, and planes in the air this week to now “we can be besties” if Tehran makes nuclear concessions (and we’ve definitely gone full circle from the JCPOA pullout).

“We’re not going to have Iran have a nuclear weapon,” Trump told reporters outside the White House following an immensely tense week that almost witnessed major war between the US and Iran.

And then this surprising and unprecedented statement coming less than two days after chaos in the Middle East was nearly unleashed:

Trump responded to reporters’ questions at the close of this week’s Iran saga following the dramatic US drone shoot down by explaining: “Everyone was saying I’m a war-monger, and now they say I’m a dove,” according to the AFP.

“I think I am neither, if you want to know the truth. I’m a man with common sense, and that’s what we need in this country, is common sense.”

Indeed, though it now looks like the White House could be experiencing regrets about its unilateral pullout of the 2015 P5+1 nuclear deal, and subsequent “maximum pressure” campaign, Trump’s decision to not pull the trigger Thursday night was met with a huge sigh of relieffrom the American people and around the globe (poll after poll has found that the vast majority of Americans do not want another US war in the Middle East).

I am at Camp David working on many things, including Iran! We have a great Economy, Tariffs have been very helpful both with respect to the huge Dollars coming IN, & on helping to make good Trade Deals. The Dow heading to BEST June in 80 years! Stock Market BEST June in 50 years!

According to Moon of Alabama blog, the US “maximum pressure” campaign has now effectively backfired, and Trump is seeking a way out as Tehran currently appears to be waging its own “counter-pressure” campaign:

Tucker Carlson has been advising President Trump privately on the escalating situation with Iran. Alex breaks down how Tucker is an important voice in a time when the establishment in Washington is pushing the President to start a war.

Trump does not want to open a military conflict with Iran. But he is already waging a brutal economic war against Iran and the country is pushing back. Trump wants negotiations with Iran without first lifting his sanctions against it. Iran rejects that.

It no longer matters what Trump wants. Iran has achieved escalation dominance. It can cause a myriad of incidents that force Trump to react. He can either launch a hot war and thereby risk his reelection bid, or he can cut back on the sanctions that hurt the Iranian people. If he does not do either, more pinpricks will follow and will over time become more costly.

But the situation looks to fester without significant alteration, perhaps building toward another near future “incident” which again brings to the two sides to the brink of war.

“We are putting additional sanctions on Iran,” Trump said further during Saturday’s press briefing. “In some cases we are going slowly, but in other cases we are moving rapidly.”

He also said military action “is always on the table” against Iran, but at the same time said he’s “open” to “reversing the escalation”.