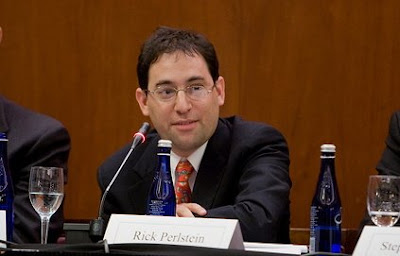 On Tuesday night’s The O’ Reilly Factor, Billo did a segment on his show where he attacked liberal journalist Rick Perlstein, who wrote an article published in Newsweek on July 10 titled, “Beyond the Palin”. The article is about why conservative elites are nervous about middle and working class white conservatives. Billo was angry with Perlstein for including his name in a list of extremist right wing commentators who influence these working class conservatives…even to the point of violence.

I didn’t think much of the segment. I thought, “just O’ Reilly infuriated again with someone who tells the truth about his constant lies and spin”. Then last night, I browsed the left wing site Crooks and Liars and saw the O’ Reilly story posted by the left wing’s O’ Reilly counterpart, Dave Neiwert. Because of Neiwert’s article, I read the entire Perlstein column and I came to the conclusion that, for reasons different from O’ Reilly’s, Perlstein is a liar.

“Now the violence is back. But this time, the line between the violent fringe and the on-air harvesters of righteous rage has been harder to find. This spring the alleged white-supremacist cop killer in Pittsburgh, Richard Poplawski, professed allegiance to conspiracist Alex Jones, whose theories Fox TV host Glenn Beck had recently been promoting.” 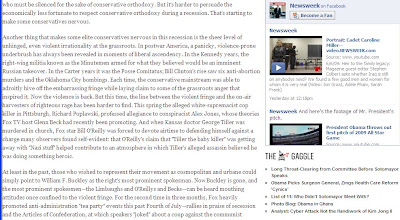 For those who are unaware, this past April 4, after three Pittsburgh cops were killed by Richard Poplawski, liberal sites like The Daily Kos, Media Matters and Raw Story immediately began smearing Alex Jones, saying that Poplawski frequented conspiracy websites and was a follower of Alex Jones, thus attempting to portray Jones as ‘violent’ and ‘dangerous’. After a huge outcry of protest and demand that the sites issue retractions, several complied, including The Daily Kos and Raw Story.

I immediately sent this email to Rick Perlstein:

In your article, “Beyond the Palin” you stated an outrageous lie.

Poplawski did not devote allegiance to Alex Jones. In fact, he opposed Jones’ views. Several blogs had written the same lie you did and have issued retractions because they found no proof of it. Care to issue your retraction? Also, you make it appear as if Glenn Beck had directly received his views from Alex Jones and then promoted them on the air. You can claim you didn’t say that, but that is how you wanted it to come across to your readers.

Alex Jones is a 9-11 truth activist and has never once called for violence. On many, many occasions Glenn Beck has called 9-11 truth activists “terrorists” or “dangerous anarchists”, so how can you claim that Glenn Beck “promoted” Jones’ views? Just two weeks ago Beck nodded in agreement when ex-CIA veteran Michael Scheuer said the only thing that could save America is Bin Laden detonating a major device inside the United States. PrisonPlanet posted my article slamming Scheuer and Beck, so how can you claim Jones and Beck are ideologically joined at the hip?

I am not defending Glenn Beck. I happen to think Beck is a corporate controlled media shill and Jones’ own websites like PrisonPlanet and Infowars have done dozens upon dozens of articles slamming Beck for his outrageous comments. I should know, I have written several of them. Just because someone like Alex Jones professes a belief or stance on something and another person professes the same view, does not mean they are a part of the same crowd.

Parts of your article were very dishonest. Let me illustrate what you did in your article with an analogy. You basically said that if there are two different anti-war people, and one of them blows up a building in protest and the other marches peacefully in protest, they are both in the same crowd and of the same mind. There’s absolutely zero proof Jones and Beck are connected, but you chose to spin and be dishonest—and even lie. You have just parroted an already debunked smear. Here are links of the retractions issued by the sites that lied about Jones, as you did.

http://rawstory.com/news/2008/Pittsburgh_shooter_was_fan_of_rightwing_0405.html (notice the apology at the bottom–they had mentioned Jones’ name in the original)

http://www.dailykos.com/story/2009/4/6/717115/-Poplawski-Linked-to-Stormfront-and-Glenn-Beck (notice the retraction by the highlighted word “UPDATE”)

I strongly urge you to issue a retraction to save your journalistic integrity.

Another area where Perlstein’s credibility is shot to hell is when he strongly attempts to make it a clear-cut case that lone wolf shooters only come of out hiding during Democratic administrations. He says:

“Another thing that makes some elite conservatives nervous in this recession is the sheer level of unhinged, even violent irrationality at the grassroots. In postwar America, a panicky, violence-prone underbrush has always been revealed in moments of liberal ascendancy.”

He mentions minutemen militia preparing for a Russian takeover in the Kennedy years, the Posse Comitatus in the Carter years and 6 anti-abortion murders and Oklahoma City during Clinton. Yeah, Perlstein is right. It only happens during the reign of Democrats. John Hinckley trying to assassinate President Reagan and permanently disabling James Brady in 1981, John Lee Malvo and John Allan Muhammad killing 10 people in the Beltway sniper attacks in 2002 and Naveed Afzal Haq killing one and wounding 5 at the Jewish Federation of Greater Seattle building in 2006 officially do not count since they happened during Republican administrations.

Of course, me saying ‘they don’t count’ was just as absurd as Perlstein’s above quote. My point (buried in thick sarcasm), quite clearly, is that there is always a lone nutball out there, and they are so nutty that they don’t even care what political party resides in the White House.

“And when Kansas doctor George Tiller was murdered in church, Fox star Bill O’Reilly was forced to devote airtime to defending himself against a charge many observers found self-evident: that O’Reilly’s claim that “Tiller the baby killer” was getting away with “Nazi stuff” helped contribute to an atmosphere in which Tiller’s alleged assassin believed he was doing something heroic.”

But Perlstein would have you believe that Tiller’s assassin, Scott Roeder, was waiting for Barack Obama to be elected President so he could “reveal himself in a moment of liberal ascendancy”, despite the fact that O’ Reilly had been vilifying Tiller on radio and TV for FIVE years prior to the murder. I know. Absurd. As absurd as the false left/right paradigm to begin with. This phony paradigm was further exposed by yours truly after the holocaust museum shooting in June when the left (the ones who label themselves “left”) called the shooter, James Von Brunn, a “right wing extremist” when in fact he hated Bush, Sr., Bush, Jr., John McCain and FOX News.

In Dave Neiwert’s article at Crooks and Liars, after posting a huge chunk of Perlstein’s column within his story (which included the lie about Alex Jones), Neiwert said this:

“The difference between “propaganda” and “journalism” is that (ideally, at least) the latter is built on a robust consideration of the facts at hand — and Perlstein’s piece clearly is that. Indeed, his piece brings up a lot of inconvenient facts that O’ Reilly conveniently omits.”

Clearly is fact, huh? Only O’ Reilly omits facts? This is clearly a case of the blind and the more blind leading the blind!