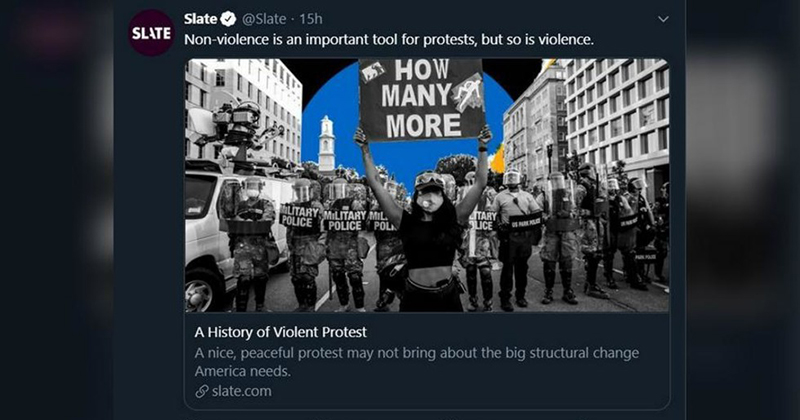 A week after censoring the official White House account over a phrase construed as “glorifying violence,” Twitter is doing nothing about a liberal publication actually doing so, pointing to the existence of a double standard.

“Non-violence is an important tool for protests, but so is violence,” says a tweet by Slate, a famously liberal outlet, posted early on Thursday to promote a podcast called ‘What Next.’

Non-violence is an important tool for protests, but so is violence. https://t.co/DD6gaLPKuF

It’s a faithful description of the episode, which is titled “A History of Violent Protest,” with a subheading, “Big structural change in America doesn’t happen without violence.” The show’s guest is Dr. Kellie Carter Jackson, a professor at Wellesley College and author of the book ‘Force and Freedom: Black Abolitionists and the Politics of Violence.’

The podcast and the tweet come exactly a week after the initial peaceful protests over the death of George Floyd in Minneapolis, Minnesota turned into looting and arson. The entire US political spectrum came together in condemning the death of the African-American man, and the four officers involved were immediately fired and quickly charged, but the violence spread across the entire country anyway.

When President Donald Trump urged Minnesota authorities to restore order, Twitter hid one of his tweets, claiming that the phrase “when the looting starts, the shooting starts” amounted to “glorification of violence.” The platform doubled down the next day, censoring the official White House account that reposted the president’s message.

Slate’s tweet did not get the same treatment. It did, however, get ratioed – with over 1,500 replies to only 100 or so retweets and 150 likes – by Thursday afternoon, with most of the responses wondering why Twitter isn’t enforcing its own rules.

“Can I get a ‘glorifying violence’ check on this,” said one user, tagging Twitter CEO Jack Dorsey. Another pointed out that Twitter had suspended a conservative commentator for “suggesting people shoot rioters to defend themselves” but Slate is“openly encouraging and excusing violence.”

@jack @Twitter @TwitterSafety You people suspended @michellemalkin for suggesting people shoot rioters to defend themselves. Here's Slate openly encouraging and excusing violence. Do something about it.

It is possible that Twitter may be subscribing to the definition of violence as offered by Nikole Hannah-Jones, the Pulitzer Prize-winning author with the New York Times’s ‘1619 Project.’

“Violence is when an agent of the state kneels on a man’s neck until all of the life is leached out of his body,” Hannah-Jones told CBS News on Tuesday. “Destroying property, which can be replaced, is not violence. To use the same language to describe those two things, I think is really not moral to do that.”

Hannah-Jones won a Pulitzer last month for an essay arguing that America’s founding ideals were false from the start and that only the struggle of African-Americans redeemed them. Her essay also claimed that American colonist rebelled against Britain to preserve slavery, which was grudgingly updated with a qualifier “some” after historians universally panned it as false.

Over the weekend, Twitter made its position on the unrest clear by changing the color of its logo to black and adding #BlackLivesMatter to its description.

Other social media companies have followed the same path. Earlier this week, Snapchat decided it would stop promotingTrump’s account, saying that the president was “inciting racial violence and injustice.” Facebook has not yet censored Trump, but is under tremendous pressure from without and within to do so.

Last month, Trump issued an executive order about enforcing a law shielding internet platforms from liability, urging government agencies to remove the protection if the platforms acted like publishers to actively discriminate against content.