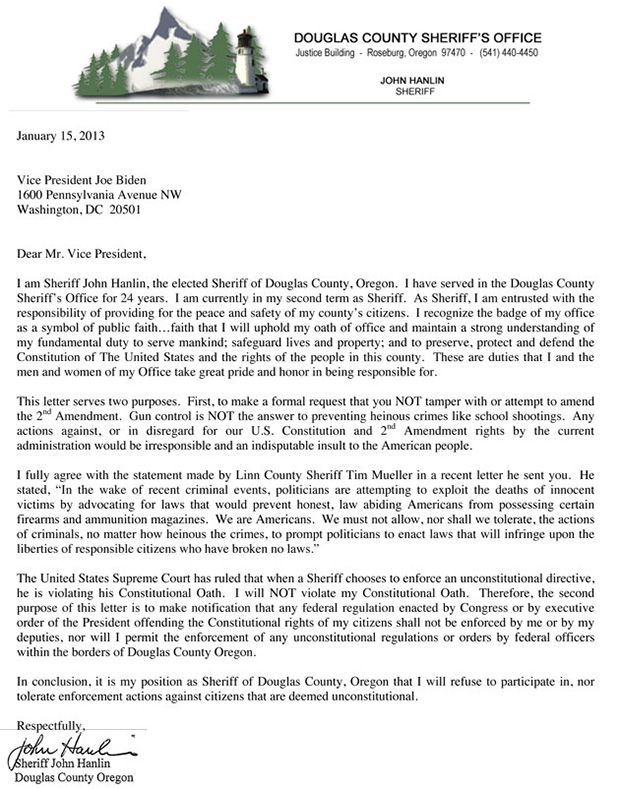 Numerous leftist media outlets and gun control groups are demonizing and not-so-indirectly blaming an Oregon sheriff for last week’s college shooting, all because of his refusal to push authoritarian anti-gun legislation and his alleged personal beliefs on Sandy Hook.

Douglas County Sheriff John Hanlin is overseeing the investigation into the Umpqua Community College shooting, in which a mentally disturbed lone gunman killed 10 people on a gun-free campus for religious reasons.

But the sheriff’s investigation isn’t the focus of progressive liberal news reports’ ire; his support of the Second Amendment and possible belief in so-called “conspiracy theories” are.

Now the sheriff is also inexplicably being targeted by the Brady Campaign and gun control freaks for something even more trivial, a post he’s accused of making on Facebook.

In the wake of Obama’s renewed call for even further gun control legislation, the liberal media immediately launched an orchestrated attack on the pro-Second Amendment sheriff, who in 2013 stood firm when he sent a letter to Vice President Joe Biden stating he would not enforce “federal regulation enacted by Congress or by executive order of the President offending the Constitutional rights of my citizens” following the Sandy Hook school shooting. 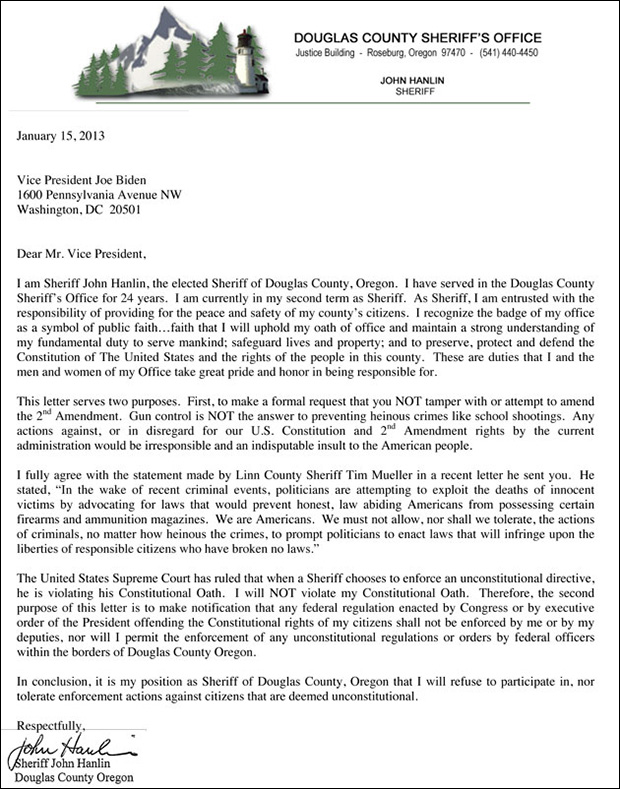 On The Today Show Friday, Matt Lauer made it a point to question the sheriff on his personal views regarding gun control and a Facebook post concerning Sandy Hook, even though the sheriff’s views played no part in Thursday’s massacre.

Hanlin answered: “Well, first of all, there’s a lot of talk about guns and gun control and that is a conversation we will all be having in the coming weeks, but right now I’m focused on completing this investigation, and more importantly, focused on the victims and families of the victims.”

The thought police journalists at Think Progress also found it strange the sheriff might have an opinion outside the mainstream orthodoxy, and made a case for why the sheriff would have likely been unable to refuse Obama’s unconstitutional orders.

“Think Progress claims that it is a ‘nonpartisan organization,’ and yet it’s bankrolled by the Center for American Progress Action Fund, a think tank headed by Bill Clinton’s former chief of staff John D. Podesta, who was also head of Barack Obama’s presidential transition team after the 2008 election,” Paul Watson wrote of the Obama administration mouthpiece in 2012. Podesta is now the chairman of Hillary Clinton’s presidential campaign.

The usual suspects, Raw Story, Mother Jones, Talking Points Memo, and the tolerant leftists at Daily Kos (who thought better of inciting police hatred when they altered their original headline, from, “Sheriff John Hanlin…two words…Fuck You,” to “Sheriff John Hanlin…one word..Really?”) all took turns attempting to shame the sheriff into submission for his personal views.

Even USA Today evidently deemed Sheriff Hanlin’s opposition to gun control newsworthy, and the Seattle Post Intelligencer has done their part to whip their readers into an anti-gun frenzy.

But the most audacious attacks have come from the propaganda artists at CNN, who drew Infowars into the equation when they showed a video Hanlin supposedly linked to on Facebook, entitled, “The Sandy Hook Shooting – Fully Exposed,” which features clips from Infowars reports questioning anomalies surrounding that day’s events.

In a recent interview with Hanlin, CNN again steered the discussion toward the Facebook post, at which point the sheriff tried to re-focus on the ongoing investigation and denied posting the video.

Why would nearly every single liberal media outlet work so hard to brew a perfect storm of anti-gun fervor culminating in an Orwellian “two minutes hate” against the sheriff, demanding he conform to the Obama administration’s anti-constitutional directives?