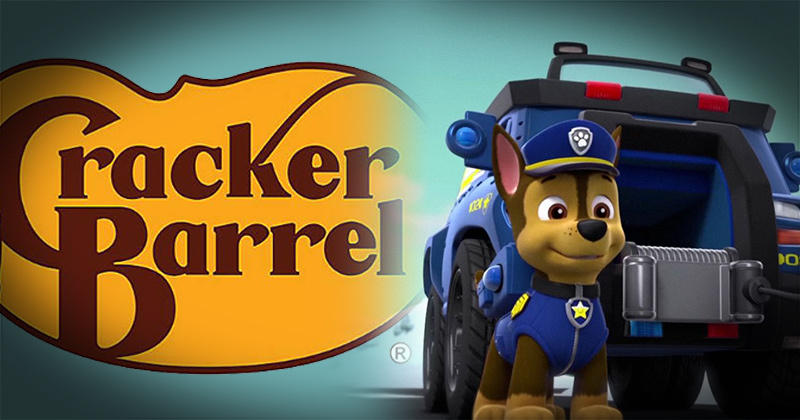 From the famous Disney ride Splash Mountain to the popular children’s show Paw Patrol, nothing is safe from the leftist mob that is obsessed with political correctness.

Following the riots taking place across the country in the name of George Floyd over the last week, law enforcement became one of the main targets of Democrats.

The liberal outrage mob that has been growing in the era of social media is now going after anything affiliated with police.

Earlier this week, the legendary reality show Cops was canceled just before its 33rd season was set to air.

Now, the A&E program Live P.D. has been pulled because of the anti-cop movement sweeping the nation.

“This is a critical time in our nation’s history and we have made the decision to cease production on Live PD,” the network told Deadline. “Going forward, we will determine if there is a clear pathway to tell the stories of both the community and the police officers whose role it is to serve them. And with that, we will be meeting with community and civil rights leaders as well as police departments.”

A Nick Jr. show called Paw Patrol is being targeted by Black Lives Matter because it dares to feature a police officer character in a good light.

Although the Twitter account for the show posted “in solidarity” with black voices, the PC police still decided the show needs to be altered.

In solidarity of #amplifymelanatedvoices we will be muting our content until June 7th to give access for Black voices to be heard so we can continue to listen and further our learning. #amplifyblackvoices pic.twitter.com/NO2KeQjpHM

The New York Times reported, “[L]ast week, when the show’s official Twitter account put out a bland call for ‘Black voices to be heard,’ commenters came after Chase. ‘Euthanize the police dog,’ they said. ‘Defund the paw patrol.’ ‘All dogs go to heaven, except the class traitors in the Paw Patrol.'”

“It’s a joke, but it’s also not,” the Times continued. “As the protests against racist police violence enter their third week, the charges are mounting against fictional cops, too. Even big-hearted cartoon police dogs — or maybe especially big-hearted cartoon police dogs — are on notice. The effort to publicize police brutality also means banishing the good-cop archetype, which reigns on both television and in viral videos of the protests themselves. ‘Paw Patrol’ seems harmless enough, and that’s the point: The movement rests on understanding that cops do plenty of harm.”

Even Disney theme park rides and popular restaurants are not safe from cries of “racism” by those who are always looking for the next way to be oppressed.

The famous Splash Mountain ride at Disney’s Florida, California and Tokyo theme parks is being criticized for having “racial overtones.”

The ride is themed after a 1946 Disney film titled Song of the South which takes place in the post-Civil War south.

Claiming the log flume ride has a “history and storyline steeped in extremely problematic and stereotypical racist tropes,” a Change.org petition calls for the ride to be themed after the first Disney film to introduce a black princess, 2009’s Princess and the Frog.

The latest victim of mob mentality this week, but certainly not the last, is the southern country-themed restaurant Cracker Barrel.

If you were having trouble guessing why the herd might be upset at the chain, they claim the “name says it all.”

I mean, really? They called it, Cracker Barrel… pic.twitter.com/lEvSJXBwew

Cracker Barrel is trending. Let me tell you, that is a place on name alone I avoided like the plague as a black woman living in the South. And the stories I heard and now see on here is why… they come by that rep honestly pic.twitter.com/mcHMzF4iDn

Obviously the business isn’t named after the racist term for white people, “cracker,” but instead, the company explains, “Back in the day, country stores were a gathering place for many communities; somewhere folks could catch up on the news, local events, and their neighbors’ lives. Country stores were complete with ‘cracker barrels’ that were used to ship soda crackers, so they wouldn’t break in transit. After the crackers had been sold, the barrels were used as makeshift tables. Visitors to the stores would sit around the barrel-tables chatting and catching up on the day’s news.”

When will the cancel culture mob stop?

Will they not be satisfied until every show or movie ever to feature law enforcement is erased from history?