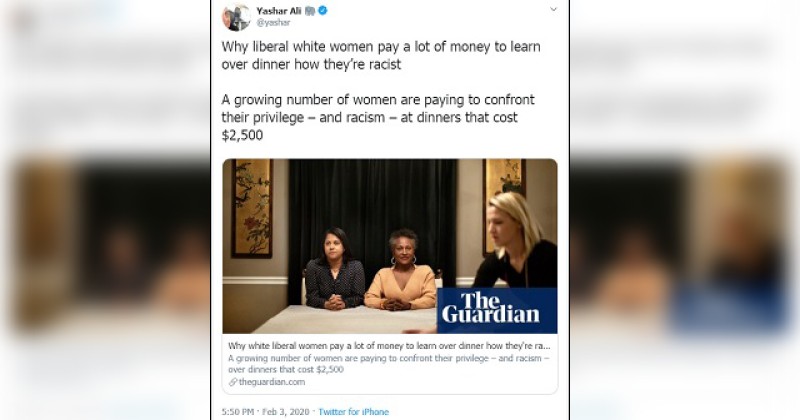 Liberal white women across America are paying $2,500 to attend dinners at which they are lectured by two non-white women about how racist they are.

The Guardian reports on Race to Dinner, a scheme where co-founders Regina Jackson, who is black, and Saira Rao, who “identifies” as Indian-American, make white guilt-riddled rich white women admit to their subconscious bigotry.

“Recently, I have been driving around, seeing a black person, and having an assumption that they are up to no good,” said Alison Gubser. “Immediately after I am like, that’s no good! This is a human, just doing their thing. Why do I think that?”

Maybe she’s been reading too many FBI crime statistics.

Participants were also asked, “What was a racist thing you did recently?”

Jess Campbell-Swanson struggled to prostrate herself adequately, stuttering, “I want to hire people of color. Not because I want to be … a white savior. I have explored my need for validation … I’m working through that … Yeah. Um … I’m struggling,” before giving up.

She subsequently committed to writing a journal to note down “thoughts that could be considered racist.”

Another woman, Morgan Richards, admitted that she was still potentially racist despite adopting two black children. When someone patronizingly labeled her a ‘white savior’ for adopting them, Richards responded, “What I went through to be a mother, I didn’t care if they were black.”

“So, you admit it is stooping low to adopt a black child?” Rao challenged her, to which Richards responded by accepting that the undertone of her statement was “racist.”

The organizers say the events are proving extremely popular and that 15 dinners have been held so far (total cost $37,500).

“I understand polls show liberal white women are the only racial group on the planet who view their own in-group negatively but dropping $2,500 on a dinner just to wallow in ethnomasochism seems like a bit much,” commented Chris Menahan.

One respondent on Twitter commented, “ladies you can also pay me 2500 american dollars to come to your home, eat all your food, and insult you.”

ladies you can also pay me 2500 american dollars to come to your home, eat all your food, and insult you
https://t.co/bcYrgiAUlY