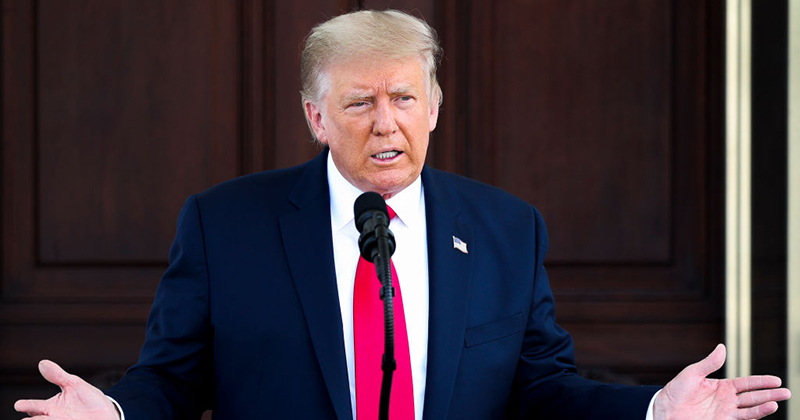 “I’m not saying the military’s in love with me – the soldiers are,” the president said at a White House press conference on Monday.

The top people in the Pentagon probably aren’t because they want to do nothing but fight wars so that all of those wonderful companies that make the bombs and make the planes and make everything else stay healthy.

Trump: "I'm not saying the military's in love with me. The soldiers are. The top people in the Pentagon probably aren't because they want to do nothing but fight wars, so all of those wonderful companies that make the bombs and make the planes and make everything else stay happy" pic.twitter.com/uu1UnBnHbT

Trump’s comments come as his latest response to a September 3 story in the Atlantic, which alleged the president had denigrated fallen American soldiers throughout his time in office, reportedly dubbing them “losers” and “suckers.” Trump has repeatedly denied the allegations, which were based on the claims of anonymous officials and aides, reiterating on Monday: “Who would say a thing like that? Only an animal would say a thing like that.”

His scathing critique of the Pentagon’s top leadership prompted a new wave of controversy, however, as a number of media pundits, Democratic lawmakers and bellicose foreign policy commentators lined up to voice horror at the “unprecedented public attack” on the military.

“Perhaps [Defense Secretary Mark Esper] should defend the honor of those with whom he serves at the Pentagon? He has little to lose, since he’s probably going to be fired anyway. Why not go out on a high note?” tweeted neoconservative luminary Bill Kristol, a top booster of the disastrous US invasion of Iraq and a vocal #NeverTrumper.

Dear @realDonaldTrump: You have attacked servicemembers who died in war; Gold Star families; POWs; and now military leadership. WHAT IS WRONG WITH YOU?

You are the Commander in Chief. Please stop denigrating our military.

Everyone is entitled to their opinion about the US military. But this comes during 9-11 commemoration here at Pentagon & military bases around the world. Generals have held dying troops in their arms, buried them at Arlington and 19 years later still comfort families. https://t.co/8W6vom3gsF

The president’s son, Donald Trump Jr., also weighed into the fray, arguing that a “permanent moratorium” on retired generals serving on the boards of defense contractors – a phenomenon known as the ‘revolving door’ – would “end the endless wars immediately.” He pointed to a series of former officials who left their posts in the Pentagon for cushy jobs in the weapons industry, where retired officers often work as lobbyists helping to grease the skids for lucrative government contracts.

If you want to end the endless wars immediately put a permanent moratorium on retired General’s serving on the boards of defense contractors.
We would be out of Afghanistan by Wednesday. https://t.co/99QkLgZ7Uj

Between 2008 and 2018, at least 380 high-ranking Pentagon officials were hired by top defense contractors after leaving public office, including 25 generals, 9 admirals, 43 lieutenant generals and 23 vice admirals, according to a report by the Project On Government Oversight (POGO). Many became lobbyists, board members, executives or consultants for firms such as Lockheed Martin, General Dynamics, Raytheon and Northrop Grumman.

What's next, calling out military brass for retiring to plum positions on military industrial company boards and then appearing on cable news to drum up support for war without disclosing their conflicts of interest? No, sir! I won't hear of it!!!!

Some netizens, as well as progressive lawmaker Ro Khanna (D-California), took up a wholly different criticism of the president, arguing that while Trump is correct about the Pentagon, he himself has been “complicit” in expanding US military budgets and feeding billions to arms dealers.

“This is correct but Trump has increased the military budget and the amount of bombs we drop, which means larger profits for defense contractors. So he’s right but he is also complicit,” one user wrote.

I know you do not believe facts matter. But if you are really opposed to companies that make bombs and planes making money, why have you proposed over $140 billion MORE in defense spending than Obama, including a slush fund for endless wars. https://t.co/W18IN0WGFM

Aren't there historical facts to back this up?

Ever heard of the USS Maine?

Or the Gulf of Tonkin?

How about 'weapons of mass destruction in Iraq.' pic.twitter.com/FVgVmDhPrT

People are so focused on saying he’s wrong that they don’t realize the real issue – he’s right, but he’s made the problem WORSE. He’s given them MORE money. Only Trump could get away with calling out a problem that he’s contributing to

Despite his withering attack on the Pentagon’s revolving door, Trump has frequently boasted of “rebuilding” the US armed forces with vast military expenditures, which continue to outspend the world’s next 11 largest defense budgets combined. He has also repeatedly touted multi-billion dollar weapons sales to Saudi Arabia and other allies, insisting they support American jobs and bring money into the country.