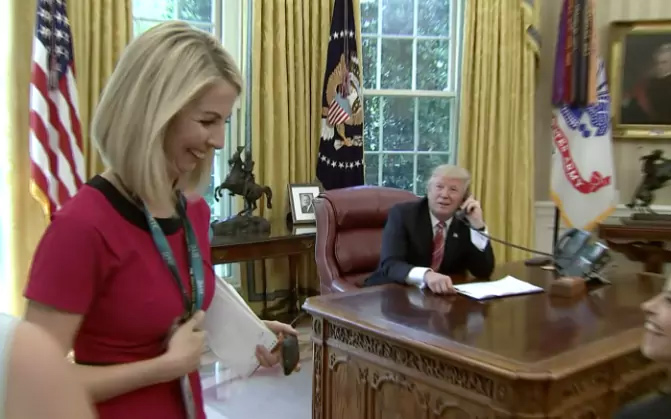 Liberals are triggered over the president’s compliment of an Irish reporter’s smile, saying his actions constituted sexual harassment in the workplace.

During a call with newly elected Irish Prime Minister Leo Varadkar Tuesday, President Trump looked around the Oval Office and observed a bunch of Irish media was present.

He then called on one reporter, RTE journalist Caitriona Perry, to ask which outlet she represented, while stating, “We have all of this beautiful Irish press. Where are you from?”

After greeting Perry, Trump proceeded to tell the PM, “She has a nice smile on her face so I bet she treats you well” – at which point the entire room laughed.

Inside the Oval Office

Perry appeared to react with amusement to the president’s gesture and later posted about the “bizarre” encounter on Twitter.

Video of the bizarre moment when President @realDonaldTrump called me over during his call with Taoiseach @campaignforLeo Varadkar. @rtenews pic.twitter.com/TMl2SFQaji

In an interview with RTE, Perry discussed the unusual set of circumstances that led her to meet the US president:

“One minute we were outside the window and the next minute I’m meeting the President of the United States,” Caitríona told RTÉ Entertainment after her encounter with the US Commander in Chief.

“Usually we would shoot from outside the window of the White House and that’s what we were expecting today but instead we were invited inside to witness the President’s call to the Taoiseach. When we went in he was already on the phone but I caught his eye and he called me over.”

On Facebook, RTE also joked about the encounter, saying Perry earned the “Presidential Seal of Approval from Donald Trump.”

Triggered liberals, on the other hand, lost it on Twitter, accusing Trump of “creepy,” perverted and sexist behavior.

you handled this so well! so sorry you had to.

Very demeaning to point and then wiggle the finger to get her to come over. Very rude to disrupt talk with another world leader.

It's hell to be objectified. When POTUS has no fear of doing that surrounded by cameras… I'm so sorry. Your success is more than a smile.

Remarks like that in workplace R completely inappropriate. There's a time & place: discussing one's attractiveness in workplace is wrong.

SO very gross! OMG! I am so sad for all the women who must interact with him. SO DISGUSTING! #notmypresident #NOCLASS #PREDATOR

U are a walking mandatory HR harassment video. No Woman should ever be objectified & humiliated like that by anyone never mind the President https://t.co/m0xqqVSkTu

Some viewers of Trump's exchange with “beautiful” reporter describe it as a textbook case of workplace harassment. https://t.co/7ftGnD0P4L

The fact that our President pointed out a woman and called her over to comment on her looks should disgust you. This is disgusting https://t.co/3Za4mR2tWa

What a fucking creep https://t.co/lKpwqm1b2U

Creepy old man does a perv demo for the cameras… https://t.co/mFfzKEBuYr

In which Trump is once again creepy to a woman doing her job, in this case @rtenews US bureau chief @CaitrionaPerry https://t.co/fTCqBs4N7u

If Democrats Win, The MOB Wins