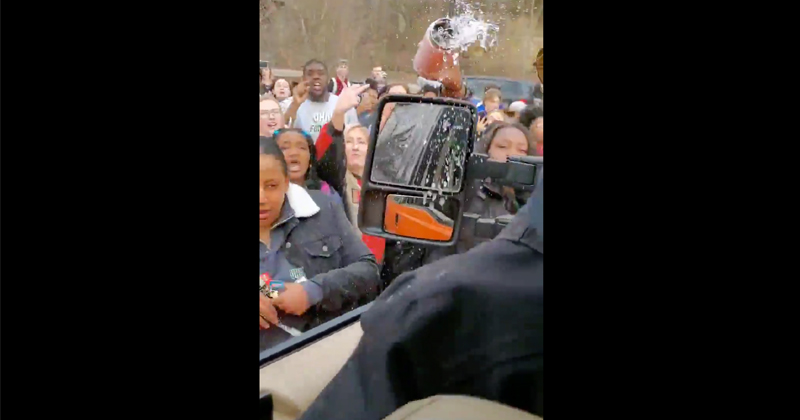 The Libertarian Party, whose ideology supposedly revolves around the “non-aggression principle,” defended the riot targeting reporter Kaitlyn Bennett in which her and her crew were pelted with projectiles, including a drink.

In response to the video posted by Bennett showing an unruly mob targeting her on a college campus, the party claimed the college students were simply utilizing their “right to assembly.”

Ms. Bennett, you have a right to your opinion, and a right to voice it.

These college students do as well.

Calling them “terrorists” because they utilized their right to assembly and speech is both dishonest and shameful.

However, the First Amendment only protects the the right to peaceably assemble, a distinction the Libertarian Party should obviously know about, but then again this is the same “party of principle” that ran anti-gun Bill Weld as their vice president for the 2016 election.

Not only was Bennett ran off a public college campus – in violation of her First Amendment rights – while being pelted on the head with projectiles, someone had also thrown a drink on her driver as they were trying to leave, which is technically assault as far as the law is concerned.

And if the Libertarian Party wants to talk about “dishonesty” and “terrorism,” it’s worth noting that Weld had once endorsed using terrorism watch lists, which are generally compiled without due process and are thus riddled with mistaken identities, to stop people from buying firearms.

“You shouldn’t have anybody who’s on a terrorist watch list be able to buy any gun at all,” he said.

“The five-shot rifle, that’s a standard military rifle,” he said. “The problem is if you attach a clip to it so it can fire more shells and if you remove the pin so that it becomes an automatic weapon.”

“And those are independent criminal offenses. That’s when they become essentially a weapon of mass destruction.”

Sounds like the Libertarian Party was being dishonest by pushing Weld as a libertarian.

Example of why I am no longer libertarian.👆

Assembly is one thing, assault is another. When you throw hot coffee on someone it's a crime, not a right.

They aren't "terrorists," but to suggest anything about this was peaceful is damaging to the liberty movement. Notice all the comments below saying "this is why I left the LP" or "I'm a libertarian but this is why I am not a member of the LP" in this thread. That's self inflicted

WTF was peaceful about what they did?

So you see zero NAP violations here? Wtf? Hands were put on her and things were thrown at her. This was NOT peaceful. I think she is annoying af, but just because the LP doesn't like LH- we should ignore the NAP?