Reuters today provides us with a spectacularly contradictory headline in their report, “Libyan fighters join Syrian revolt.” Obviously foreign fighters from Libya, raiding cities, attacking government and civilian targets, and attempting to subvert and overthrow the sovereign government of Syria is not a “revolt.” It is an invasion.

Image: Libyan Mahdi al-Harati of the US State Department, United Nations, and the UK Home Office (page 5, .pdf)-listed terrorist organization, the Libyan Islamic Fighting Group (LIFG), addressing fellow terrorists in Syria. Harati is now commanding a Libyan brigade operating inside of Syria attempting to destroy the Syrian government and subjugate the Syrian population. Traditionally, this is known as “foreign invasion.”

Reuters reported, that Mahdi al-Harati, “a powerful militia chief from Libya’s western mountains,” who is actually a militant of the US, British, and UN listed terrorist organization Libyan Islamic Fighting Group (LIFG), “now leads a unit in Syria, made up mainly of Syrians but also including some foreign fighters, including 20 senior members of his own Libyan rebel unit.” Reuters would go on to explain, “the Libyans aiding the Syrian rebels include specialists in communications, logistics, humanitarian issues and heavy weapons,” and that they “operate training bases, teaching fitness and battlefield tactics.”

Reuters concedes that the ongoing battle has nothing to do with democracy, but instead is purely a sectarian campaign aimed at “pushing out” Syria’s minorities, perceived to be “oppressing” “Sunni Muslims.”

Reuters’ propaganda piece is rounded off with a Libyan terrorist allegedly threatening that “the militancy would spread across the region as long as the West does not do more to hasten the downfall of Assad,” a talking point plucked straight from the halls of America’s corporate-financier funded think-tanks. In fact, just such a think-tank, the Foreign Policy Initiative, recently published astatement signed by Bush-era Neo-Conservatives stating:

“America’s national security interests are intertwined with the fate of the Syrian people and the wider region.  Indeed, Syria’s escalating conflict now threatens to directly affect the country’s neighbors, including Turkey, Lebanon, Jordan, Iraq, and Israel, and could provide an opening for terrorist groups like al Qaeda to exploit.”

Inspiring indeed that these two implacable enemies, Al Qaeda’s LIFG and America’s Neo-Con establishment, are now operating in such seamless harmony. It should be remembered that those who signed this statement, including Elliott Abrams, Max Boot, Ellen Bork, William Kristol, Paul Bremer, Paula Dobriansk, Douglas Feith, Robert Kagan, Clifford D. May, Stephen Rademaker, Michael Weiss, Radwan Ziadeh, were among the very engineers of the fraudulent “War on Terror.” Radwan Ziadeh, last on the list, is in fact a “Syrian National Council” member – one of several proxiesthe US State Department is hoping to slip into power in Syria.

Syria Is Suffering a Foreign Invasion, not a Revolution.

To reach Syria, Libyan fighters must cross the Mediterranean Sea and enter via Turkey, or cross Egypt, Israel, and enter via Jordan. The government of Syria has threatened Libya in no conceivable manner, making Libya’s campaign an intolerable act of military aggression. Worst of all, the NATO-installed government in Tripoli has officially approved of supporting military operations in distant Syria. 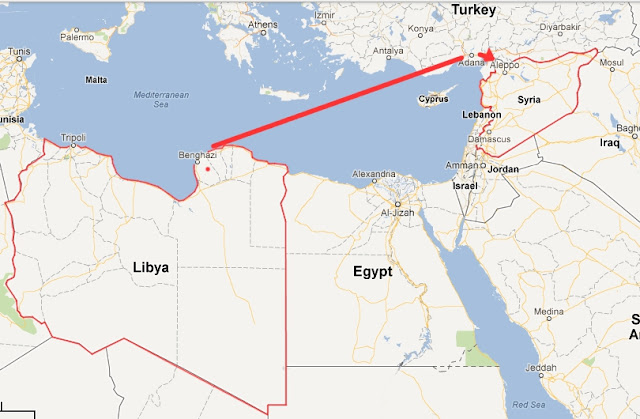 Image: Libya is separated by sea and several nations from Syria. For hundreds, possibly thousands of Libyan fighters to now be turning up in Syria indicates a military operation requiring multinational support, and more specifically, NATO-backing.

Abdulhakim Belhadj, head of the Tripoli Military Council and the former leader of the Libyan Islamic Fighting Group, “met with Free Syrian Army leaders in Istanbul and on the border with Turkey,” said a military official working with Mr Belhadj. “Mustafa Abdul Jalil (the interim Libyan president) sent him there.”

Syrian rebels held secret talks with Libya’s new authorities on Friday, aiming to secure weapons and money for their insurgency against President Bashar al-Assad’s regime, The Daily Telegraph has learned.

At the meeting, which was held in Istanbul and included Turkish officials, the Syrians requested “assistance” from the Libyan representatives and were offered arms, and potentially volunteers.

“There is something being planned to send weapons and even Libyan fighters to Syria,” said a Libyan source, speaking on condition of anonymity. “There is a military intervention on the way. Within a few weeks you will see.”

Later that month, some 600 Libyan terrorists would be reported to have entered Syria to begin combat operations and as recently as last month, CNN, whose Ivan Watson accompanied terrorists over the Turkish-Syrian border and into Aleppo, revealed that indeed foreign fighters were amongst the militants, particularly Libyans. It was admitted that:

Meanwhile, residents of the village where the Syrian Falcons were headquartered said there were fighters of several North African nationalities also serving with the brigade’s ranks.

A volunteer Libyan fighter has also told CNN he intends to travel from Turkey to Syria within days to add a “platoon” of Libyan fighters to armed movement.

On Wednesday, CNN’s crew met a Libyan fighter who had crossed into Syria from Turkey with four other Libyans. The fighter wore full camouflage and was carrying a Kalashnikov rifle. He said more Libyan fighters were on the way.

The foreign fighters, some of them are clearly drawn because they see this as … a jihad. So this is a magnet for jihadists who see this as a fight for Sunni Muslims.

CNN’s reports provide bookends to 2011’s admissions that large numbers of Libyan terrorists flush with NATO cash and weapons had headed to Syria, with notorious terrorist LIFG commandersmaking the arrangements.

In essence, Syria has been under invasion for nearly a year by Libyan terrorists – and as we will see, the Libyans are by no means an imperial force, but rather a terroristic foreign legion employed by far more nefarious players.

The West is Invading Syria by Proxy

NATO-member Turkey is directly complicit in facilitating Libya’s extraterritorial aggression by hosting Libyan fighters within its borders, while coordinating their funding, arming, and logistics as they cross the Turkish-Syrian border. Along Turkey’s borders also facilitating Libya’s invasion of Syria, is America’s CIA.

The New York Times admitted in June 2012 in their article, “C.I.A. Said to Aid in Steering Arms to Syrian Opposition,” that “CIA officers are operating secretly in southern Turkey,” and directing weapons including, “automatic rifles, rocket-propelled grenades, ammunition and some antitank weapons.” The NYT implicates Turkey, Saudi Arabia, and Qatar as the primary underwriters for the weapons while the CIA coordinates the logistics.

Image: The “Friends of Syria” represent many of the co-conspirators described in Seymour Hersh’s extensive 9 page report “The Redirection.” Syria’s violence is not the result of an indigenous uprising carrying “political aspirations,” but rather the conspiring and machinations of the global elite, who long-ago  premeditated the destruction of Syria for their own, larger, overarching geopolitical agenda.

To understand this particular arrangement, and why the US has forfeited the plausible deniability it seems it is so painstakingly trying to maintain, we must examine admissions by US policy makers stretching as far back as 2007 admitting that they planned to overthrow the government of Syria with foreign-sectarian extremists, using nations like Saudi Arabia to channel funds and weapons through, specifically to maintain the illusion that they were somehow not involved.

Seymour Hersh’s lengthy 9 page report, “The Redirection” published in the New Yorker in 2007 exposes US plans to use clandestine means to overthrow the government of Syria in a wider effort to undermine and destroy Iran. “A by-product of these activities,” writes Hersh, “has been the bolstering of Sunni extremist groups that espouse a militant vision of Islam and are hostile to America and sympathetic to Al Qaeda.”

To say that Libya’s LIFG is “sympathetic to Al Qaeda” would, however, be misleading. It is Al Qaeda.

LIFG merged with the US-Saudi created terror organization in 2007, according to the US Army’s West Point Combating Terrorism Center report, “Al-Qa’ida’s Foreign Fighters in Iraq:”

The apparent surge in Libyan recruits traveling to Iraq may be linked the Libyan Islamic Fighting Group’s (LIFG) increasingly cooperative relationship with al‐Qa’ida, which culminated in the LIFG officially joining al‐Qa’ida on November 3, 2007. (page 9, .pdf)

Hersh’s report would continue by stating, “the Saudi government, with Washington’s approval, would provide funds and logistical aid to weaken the government of President Bashir Assad, of Syria.” This included billions to pro-Saudi factions in Lebanon who were propping up militant groups linked to Al Qaeda. These militant groups are now crossing over the Lebanese-Syrian border to join their Libyan counterparts.

Clearly the conspiracy being pieced together and executed in 2007, described by Seymour Hersh citing a myriad of US, Saudi, and Lebanese sources, is unfolding before our eyes. It was a conspiracy hatched of mutual US-Israeli-Saudi interests, not based on humanitarian concerns or “democracy,” but rather on toppling sovereign nations seen as a threat to their collective extraterritorial influence throughout the region.

The US is executing a strategy where a series of specialized proxies are being used to carry out its geopolitical agenda across the Arab World. Saudi Arabia, Qatar, and the United Arab Emirates are channeling funding and leading diplomatic efforts to ensure the West’s agenda is presented with an “Arab face,” while factions within nations like Lebanon, Turkey, and Libya handle varying degrees of logistical support and covert military intervention.

Syria is being invaded by proxy, by the US, NATO, Israel, and the Gulf Cooperative Council (GCC). Of this there is no doubt. The corporate-financier interests driving this agenda have ensured a propaganda campaign will accompany this effort. This propaganda campaign is as ceaseless as it is shameless.

For example, in yet another CNN article covering Libyan fighters killing in Syria titled, “Libya rebels move onto Syrian battlefield,” we are told that NATO-armed terrorists “tasted the beauty of Jihad” in Libya –  “beauty” Libya is now exporting to Syria.

Video: Wiped out. Tawarga, once home to 10,000 (this video claims up to 35,000) people, many part of Libya’s black community who had resided in the country for generations, had its inhabitants either exiled, imprisoned or exterminated. NATO-backed militants told the Telegraph in 2011, ” every single one of them has left, and we will never allow them to come back.” These sorts of atrocities are what the corporate-financier driven media sold in Libya, and what they are trying to sell again in Syria, ironically couched in “humanitarian concern.”
….

CNN’s “beauty” involved a conflict that saw NATO proxy forces empty out entire cities of black Libyans before systematically driving them beyond Libya’s borders either killing or imprisoning those who didn’t or couldn’t flee. This was after cities were blockaded by militants on the ground while NATO ceaselessly bombarded population centers from the air, with the specific goal of starving people into submission.

And for the families of the 3,000 Americans who died on September 11, 2001 who were told Al Qaeda was not just an enemy of America, but an enemy of mankind, or the tens of thousands in America’s Armed Forces who were killed, maimed, and otherwise affected by the decade of war that would follow in the so-called “War on Terror,” the “contradictory aspects” of America’s current foreign policy remain unexplained.

To the victims on both sides of a decade of global war, to see Al Qaeda’s terror campaigns, genocide, and other atrocities now underwritten by NATO and both spun and praised throughout the Western media must seem surreal. And such injustice, hypocrisy and misery will continue until we collectively find the resolve to identify, boycott, and entirely replace the corporate-financier interests driving this surreal paradigm.