The Complicated Futility of Ignorance

I have several topics to touch on, none substantial enough for a post on its own, although there is a thread through all of these.

Perhaps the most difficult part about writing this post was to come up with a title that tied it all together.  I found the title from a line in Kurt Vonnegut’s novel, “Hocus Pocus.”

“…we took the 10 machines we agreed were the most beguiling, and we put them on permanent exhibit in the foyer of this library underneath a sign whose words can surely be applied to this whole ruined planet nowadays: THE COMPLICATED FUTILITY OF IGNORANCE”

Out of the ashes of the Second World War, having witnessed the unthinkable power of the atomic age…

Truman had no trouble thinking of it.

Cooperation = do whatever the US government says.

Conflict = don’t do whatever the United States government says.

Imposed Cost = your world turned to hell on earth.

That’s it; I quit.  I am three paragraphs into a 55 paragraph speech.  I am already speechless.

U.S. President Barack Obama warned Russia on Friday that its bombing campaign against Syrian rebels will suck Moscow into a “quagmire,” after a third straight day of air raids in support of President Bashar al-Assad.

David Cameron weighed in with his wise counsel:

“It’s going to make the region more unstable, it will lead to further radicalisation and increased terrorism. I would say to them ‘change direction, join us in attacking ISIL’.”

Britain has been actively engaged in making the region “more unstable” and therefore leading to “further radicalisation and increased terrorism” since Lloyd George was prime minister and Foreign Secretary Arthur James Balfour made his declaration to Lord Rothschild.

I guess Cameron doesn’t want to be out-hypocrited by Obama the hypocrite.

Europe is experiencing one of the most significant influxes of migrants and refugees in its history. Pushed by civil war and terror and pulled by the promise of a better life, hundreds of thousands of people have fled the Middle East and Africa, risking their lives along the way.

Among the forces driving people to take such risks are the conflicts raging in Syria and Afghanistan, and human rights abuses in Eritrea. The majority – 62% – of those who have reached Europe by boat so far this year are from those three countries.

There are also people setting out from Libya, Sudan, Pakistan, Nigeria, Kosovo, Iraq, Iran Darfur, Somalia and other countries in the hope of a new life somewhere like Germany, France or the UK.

Note a common thread in this list of countries?

After an initial burst of enthusiasm regarding refugees, Merkel is toning it down a bit:

German Chancellor Angela Merkel said Europe needed to protect its external frontiers as it faces the greatest influx of refugees since World War Two – a crisis that she said was “testing Europe’s mettle”.

More than 200,000 people are estimated to have arrived in Germany in September alone — roughly the same as for all of last year — and the government estimates that 800,000 or more might come over the course of 2015.

What has caused her to change her tune?  Perhaps this:

A poll on Thursday showed Merkel’s popularity slump to its lowest level in nearly four years, reflecting growing concern about the flood of migrants.

Of course, with the threat of bankruptcy held over Volkswagen by the US government, Merkel may just have to tough it out.

McCain is all for bringing on the final war, the one that ends with everyone on earth seeing a bright flash of light followed by a big mushroom cloud one moment before being vaporized into nothingness:

Senior U.S. and Russian officials spoke for just over an hour by secure video conference on Thursday, focussing on ways to keep air crews safe, the Pentagon said, as the two militaries carry out parallel campaigns with competing objectives.

U.S. Republican Senator John McCain, chairman of the Senate Armed Services Committee, and a frequent Obama critic, questioned the logic of talks on how to keep U.S. and Russian militaries apart, known in military parlance as “deconfliction.”

“Unfortunately, it appears ‘deconfliction’ is merely an Orwellian euphemism for this administration’s acceptance of Russia’s expanded role in Syria, and as a consequence, for Assad’s continued brutalization of the Syrian people,” McCain said.

The following requires no expansion:

An air strike, probably carried out by U.S.-led coalition forces, killed 19 staff and patients, including three children on Saturday, in a hospital run by Medecins Sans Frontieres (MSF) in the northern city of Kunduz, the aid group said.

The U.S. military said it conducted an air strike “in the vicinity” of the hospital as it targeted Taliban insurgents who were directly firing on U.S. military personnel and an investigation into the incident had begun.

U.N. Human Rights chief Zeid Ra’ad Al Hussein led a chorus of condemnation, without saying who carried out the strike, noting that an assault on a hospital could amount to a war crime.

“This event is utterly tragic, inexcusable, and possibly even criminal,” he said.

The medical charity said its staff phoned military officials at NATO in Kabul and Washington during the morning attack, but bombs continued to rain down for nearly an hour.

“All indications currently point to the bombing being carried out by international Coalition forces,” MSF said, demanding “a full and transparent account”.

MSF said it had given the location of the hospital to both Afghan and U.S. forces several times in the past few months, most recently this week, to avoid being caught in crossfire.

Well, maybe one expansion: telling soulless people where you live may not be the best idea, especially if you are unarmed and they have deadly weapons and they are also immune from prosecution.

There is a substantial segment of Evangelical Christians which unwaveringly supports the state of Israel and longs for their interpretation of the end times.  Their successes toward Israel might just make self-fulfilling their vision.

Ezekiel 38: The word of the Lord came to me: 2 “Son of man, set your face against Gog, of the land of Magog, the chief prince of Meshek and Tubal; prophesy against him 3 and say: ‘This is what the Sovereign Lord says: I am against you, Gog, chief prince of Meshek and Tubal. 4 I will turn you around, put hooks in your jaws and bring you out with your whole army—your horses, your horsemen fully armed, and a great horde with large and small shields, all of them brandishing their swords. 5 Persia, Cush and Put will be with them, all with shields and helmets, 6 also Gomer with all its troops, and Beth Togarmah from the far north with all its troops—the many nations with you.

Confusing, I know.  Who are these tribes?  A typical interpretation:

The scriptures indicate that a northern army will invade Israel in the last days. Bible scholars have traced the tribes and have determined that this northern army is led by tribes that have settled in Russia. This prophecy has never been fulfilled so it will be fulfilled in the future.

The details of this invasion from the north are given in Ezekiel chapters 38 and 39. The allies that come with this northern invader are named by nation (tribe). Today most of these nations are Islamic and are enemies of Israel. Ezekiel even lists the countries that will question the reason for this invasion. These nations seem to be nations that come out of the old British Empire and oil rich nations aligned with the West. Ezekiel mentions these nations as Tarshish, all her young lions (English speaking nations), Sheba and Dedan (Saudi Arabia, Kuwait). The alignment of nations predicted in Ezekiel is the alignment that we see in that region today. God said He will destroy this northern army that comes against Israel and by doing so He will magnify Himself and become known to many nations.

Russia and Islamic enemies of Israel; opposed by the English-speaking nations.

It says in Ezekiel that at the time of this invasion God will send fire on Magog (Russia) and those that dwell securely in the isles (or coast lands), and from that day they shall know that the God of Israel exists.

Revelation 9: 13 The sixth angel sounded his trumpet, and I heard a voice coming from the four horns of the golden altar that is before God. 14 It said to the sixth angel who had the trumpet, “Release the four angels who are bound at the great river Euphrates.” 15 And the four angels who had been kept ready for this very hour and day and month and year were released to kill a third of mankind. 16 The number of the mounted troops was twice ten thousand times ten thousand. I heard their number.

A disposable 200,000,000 man Asian army dominated by China: God said in Revelation that an army of two hundred million from out of the East will be raised for a specific year, month, day, and hour to kill one third of the men of earth….The prophecy in Revelation says that this army will have multicolored breastplates this indicates that that this army from the East may include several different armies and nations.

The US and Russia have already arrived at this evangelical hoped-for Armageddon. What about the Chinese?

TEL AVIV – A Syrian-regime source and a Middle Eastern defense official have both confirmed to WND that a Chinese naval vessel carrying dozens of “military advisers” has crossed into the Mediterranean Sea and is awaiting further instructions to potentially dock in Syria.

The J-15 warplanes will take off from the Chinese Liaoning-CV-16 aircraft carrier, which reached Syrian shores on Sept. 26…

Do I believe in this as fulfillment to Biblical prophecy?  I don’t spend any energy on such things.  God doesn’t need my help or good wishes to blow up the world (assuming He actually has some desire to do this, which I do not assume).  He does call me to peace; if He has something else in mind, I leave this in His hands.

I conclude with one thought:

2 Thessalonians 2:3 Don’t let anyone deceive you in any way, for that day will not come until the rebellion occurs and the man of lawlessness is revealed, the man doomed to destruction. 4 He will oppose and will exalt himself over everything that is called God or is worshiped, so that he sets himself up in God’s temple, proclaiming himself to be God.

Heavy, I know.  I didn’t plan to arrive here when I began the journey of this post.

I don’t view any of this as a sign of end times.  There have been many men of lawlessness in the intervening 2000 years – some that put today’s lawless men to shame in terms of depravity.  No end times brought on by any of them; I see nothing special about these times.

Nothing special beyond the proliferation of nuclear weapons hanging over the heads of all of humanity.

There is a lawless one today, one who places himself in the position of God, above all others.

Here is his symbol. 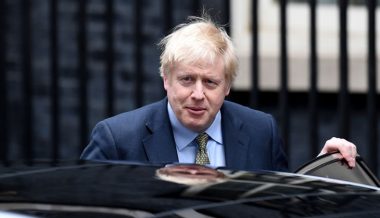