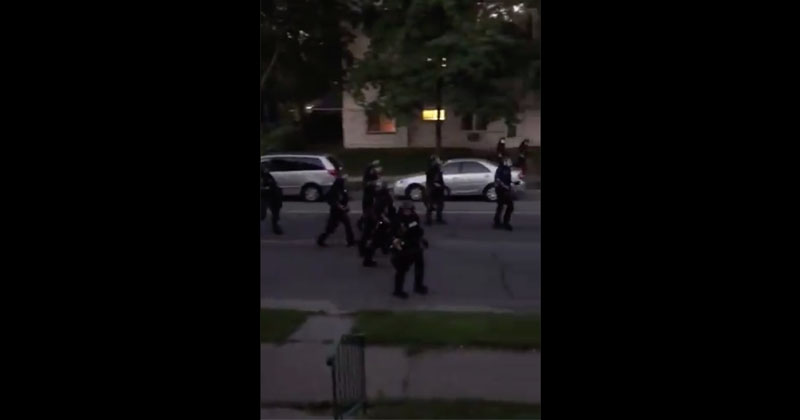 Police and the National Guard have been sweeping residential streets in Minneapolis, ordering residents to obey the curfew – and marking those who refuse to go inside with paint, triggering a new wave of outrage over police abuse.

A squad of heavily equipped National Guardsmen and police officers were seen running through a street in a suburban area of Minneapolis. The footage that surfaced online shows them approaching residents who were recording their passage, yelling “Get inside, go inside!”

Eventually, one officer can be heard shouting “light ‘em up!” at which point the squad fires off volleys of paint at the bystanders. They swiftly take cover inside.

The chilling video comes at a time when major American cities are rioting against police brutality. In Minneapolis itself, protest marches – sparked by the death of African American man, George Floyd, at the hands of police – descended into full-blown riots.

Minnesota called in its National Guard days earlier, enforcing a curfew and trying to quell the violence. Currently, there are some 4,100 guardsmen deployed to Minneapolis metro area and the vicinity, with 6,000 more set to arrive. It marks the biggest National Guard deployment in the state’s history, according to local press.

Are there elements of planned chaos in Minneapolis?