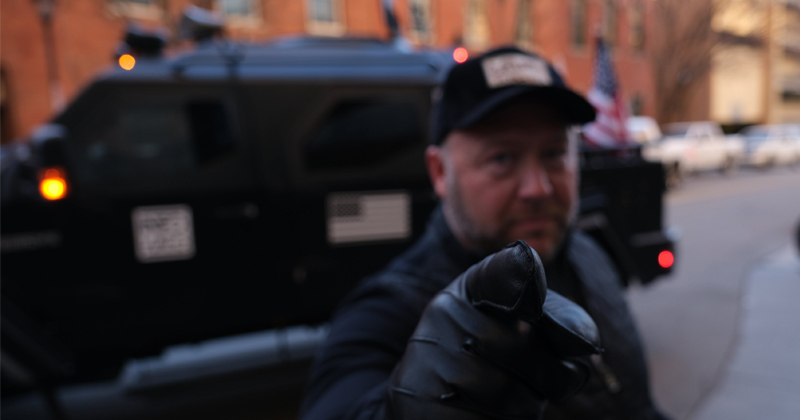 Alex Jones is taking to the streets LIVE on this historic day to defend the Second Amendment. Tune in!

Infowars’ Alex Jones and crew are in Richmond, Virginia to stand up for the Second Amendment and to join fellow patriots to send a message to the state’s Democrat politicians.

Stay tuned for updates on this historic march and remember, Infowars is the most banned broadcast in the world, so share this link!

Alex Jones breaks how Gov. Northam’s carefully manufactured crisis in Richmond, Virginity has morphed into a major victory for preserving our God-given rights in the United States.

Alex Jones and red-blooded, American patriots discuss why gathering on the Richmond Capitol grounds to celebrate the 2nd Amendment is a cherished annual event to them.

Alex Jones bullhorns while surrounded by a sea of pro-2nd Amendment patriots in Richmond, Virginia.

Alex Jones shows how the Second Amendment sanctuary counties in Virginia make up the overwhelming majority of the state, yet a small percentage of cities are trying to enforce unconstitutional laws on the rest of the populace.

Alex Jones exposes how Virginia Governor Ralph Northam has socially engineered conditions at the capital to be intentionally explosive prior to the pro-2nd Amendment demonstration.

A woman describes how part of her family escaped Cuba, but now the U.S. is becoming a socialist hellhole.

While in DC, Alex Jones ran into Geraldo Rivera in the streets and conducts a quick interview on impeachment, the country’s soul and how Alex Jones has been demonized by the media.

Alex Jones lays out the land in Richmond, Virginia where the 2nd Amendment rally is taking place and warns of ANTIFA groups who plan to stealthily attack those they’ve deemed a threat to their cause.

Alex Jones reports live from the capital in Richmond, Virginia where the governor has tried to infringe on the 2nd amendment rights of millions Americans.
The Reopen America Back to School Special is now live! Earn double Patriot Points on our hottest items!

Greg Reese reports that anti-gun demonstrators are the majority being allowed into the government’s caged area near the Capitol steps.

Meanwhile, pro-gun individuals are waiting in line by the thousands and the state is using metal detectors to prevent anyone with a gun from entering the mandated protest zone.

Reese reports from the inside of Virginia’s unconstitutional gun-free zone.

Inside the illegal gun free zone at the Richmond Capital building pic.twitter.com/GqxILXMFnx

Savanah Hernandez is also live on the ground to report on the protest.

Vietnamese Americans for Trump at the Richmond Gun Rally:

“We have to protect our right to have guns to defend freedom and democracy” #AsiansForTrump pic.twitter.com/1MFz11JU2r

Kaitlin Bennett also attended the event and talked with a group of Trump supporters countering the MSM narrative that conservatives and pro-Second Amendment demonstraters are white supremacists.

This is who the media was trying to call white supremacists in Richmond for supporting the 2nd amendment. The left's lies didn't work today! #VirginiaRally pic.twitter.com/ZuDPb8duY7

Below is something you likely wouldn’t find at a liberal protest… Marchers singing the Star Spangled Banner!

2A Protesters in Virginia singing the Star Spangled Banner.

“Northam out! Northam out!” chants can be heard coming from the massive crowd.

Chants of “Northam Out” erupting in Virginia pic.twitter.com/XHhJtxMIzx

Don’t forget, Survival Shield X-2 is back! Get the next generation of super high-quality nascent iodine at 40% off now!