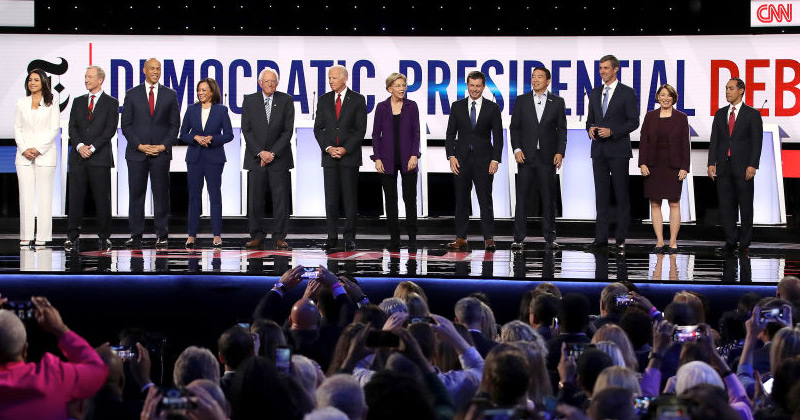 Democrats are on a roll offering free stuff and trying to outdo each others’ “Orange Man Bad” remarks during the 4th Clown World Democrat debate.

Keep refreshing this page for live updates from the Oct. 15 Democrat debates in Westerville, Ohio:

DNC debate is off to a horrifying start with the Chairman of the DNC encouraging the intelligence community to leak on their Commander In Chief.

This further solidifies the notion that the intelligence community is being weaponize against a sitting president.

Tulsi Gabbard admits impeachment talks have been going on since Trump won and get over it — but she’s still for impeachment.

WATCH: Tulsi Gabbard: "Calls for impeachment really began shortly after Trump won his election, and as unhappy as that may make us as Democrats, he won that election in 2016." #DemDebate pic.twitter.com/ZiumZNjsJO

Tulsi Gabbard slams mainstream media for accusing her of acting as a Russian asset for condemning endless wars.

Video: @TulsiGabbard accuses the press of cheerleading war and regime changes, but she saved her biggest attacks for a negative @NYTimes piece and then @CNN, which allowed @Bakari_Sellers to attack her on @NewDay as an asset for the Russian government #DemDebate pic.twitter.com/tow6HA9K56

CNN cuts off Tulsi Gabbard when addressing her fitness for office over the other candidates.

when it's time for the good pudding at the retirement home https://t.co/qM1VVHylJ3

Tulsi Gabbard highlights the major shift left that the Democratic Party has taken on abortion.

It used to be Democratic candidates would publicly say abortion should be "safe, legal, and rare."

Also, Biden: “I never discussed anything to do with Ukraine with my son.” – he did.

Biden responds by lying, falsely claims that he never talk to his son about business. Even his son said that he did. pic.twitter.com/jxeVoHTSIU

What did Joe Biden say here? Anyone? No? Okay, that's what I'm thinking too #DemDebate pic.twitter.com/qs2xgvMN6f

Democrat Joe Biden is mentally all over the place, claims people are “clipping coupons in the stock market” pic.twitter.com/EleAjG7ElA

A light-hearted moment between Joe Biden and Bernie Sanders on stage draws laughs from the debate audience:

Sanders next to him: “Suggesting I’m Vladimir Putin here?”#DemDebate pic.twitter.com/yRaDFPKGAy

"You must register that weapon. When you register it, the likelihood of it being used diminishes expodentially." @JoeBiden says he knows how to deter Americans from using AR-15s to murder people https://t.co/uL7vfek14y pic.twitter.com/NeEcZt4gBx

.@BernieSanders to @JoeBiden: "You got the disastrous war in Iraq done, you got the bankruptcy bill which is hurting millions…, you got trade agreements like NAFTA and PNTR with China done which have cost us 4 million jobs" pic.twitter.com/aBjCAPjNnK

.@BernieSanders, a multi-millionaire, makes the case for why billionaires shouldn't exist. pic.twitter.com/0mtty5ha57

Bernie Sanders pushes back against notion he’s too old and unhealthy after just suffering from heart attack.

Bernie Sanders on his health: "Let me take this moment if I might to thank so many people from all over this country, including many of my colleagues up here, for their love, for their prayers, for their well wishes. And I just want to thank you from the bottom of my heart." pic.twitter.com/zT5Vmpn55B

Confirmed: @BernieSanders is "not on marijuana tonight." pic.twitter.com/cQwqcojbT6

Bernie Sanders promises jobs for every American through the socialist Green New Deal.

We will guarantee every American a job through a #GreenNewDeal.

There are so many Americans in need of good work, and there is so much good work to be done to stop the climate crisis.

Thank you @BernieSanders for leading the way. pic.twitter.com/lXIPqP9vBp

Elizabeth Warren dodges question on raising taxes for “Medicare for all” — again.

Senator Warren won’t admit Medicare for All will raise taxes on the middle class pic.twitter.com/tnUPtATdud

Elizabeth Warren says “I don’t have a beef with billionaires” before launching into diatribe about billionaires.

Pete Buttigieg calls out Warren’s refusal to admit taxes will rise with “Medicare for all” plan.

WATCH: Pete Buttigieg hits Elizabeth Warren for again refusing to admit her "Medicare for All" plan will cause middle class taxes to go up.

"Your signature is to have a plan for everything… except this!" #DemDebate pic.twitter.com/jCQPcgCRYf

Buttigieg calls for packing the Supreme Court with “judges who share my values.”

WATCH: Pete Buttigieg says he doesn't want to pack the Supreme Court with extra judges… right before admitting he wants to "reform" the Court and appoint judges who "share my values" such as abortion. #DemDebate pic.twitter.com/v8RsSMRAd9

Amy Klobuchar knocks on Warren’s socialist “Medicare for all” plan.

Amy Klobuchar on "Medicare for All:" "I appreciate Elizabeth's work. But again, the difference between a plan and a pipe dream is something you can actually get done" #DemDebate pic.twitter.com/m2yyF3jQbF

Kamala Harris: Trump confessed to crime, will be held accountable.

Kamala Harris on the impeachment inquiry: "As a former prosecutor, I know a confession when I see it. … Donald Trump needs to be held accountable" #DemDebate https://t.co/F3BB1gWWRf pic.twitter.com/d5vQHARba1

Kamala Harris: Women will die if they don’t have access to abortion.

Kamala Harris: "This is the sixth debate we have had in this presidential cycle and not nearly one word — with all of these discussions about health care — on women's access to reproductive health care, which is under full on attack in America today." pic.twitter.com/YZPbmm7zYD

Elizabeth Warren just embarrassed Kamala Harris by refusing to entertain her crazy idea of calling for the President of the United States to be Banned from Twitter.

"Saying this is a rules problem is ignoring the reality that Americans see around us every single day." #DemDebate #yanggang pic.twitter.com/IVxP0et6y3

Here's the video of Andrew Yang taking a swipe at Bing which you have to admit is pretty funny #DemDebate pic.twitter.com/ruGc8eXvyK

Democrat Beto O'Rourke: If Americans do not let us confiscate their semi automatic firearms there will be “consequences from law enforcement” pic.twitter.com/ML5iukA6GR

Beto O'Rourke on the impeachment inquiry: "We have a responsibility to be fearless in the face of this President's criminality and his lawlessness" #DemDebate pic.twitter.com/Zobz9AOYSw

As president, I would invest in infrastructure to put people back to work. We need a Green New Deal to unleash millions of new jobs in a sustainable clean energy economy. #DemocraticDebate pic.twitter.com/N4VirqhvQF

Cory Booker: Trump impeachment needs to be “about patriotism, not partisanship”

Tonight on the debate stage, @CoryBooker reiterated his belief that we are not facing a political question with regards to the impeachment inquiry of Trump, but a moral one. https://t.co/F6kuOj6DoK

“This president has violated his [oath of office], I will do mine.” #DemDebate pic.twitter.com/wlPJzK9SzD

Ironically, this statement is disqualifying for the presidency. pic.twitter.com/e1dvtjbHvo

Billionaire Tom Steyer on the income gap: "It's absolutely wrong and it's absolutely undemocratic and unfair" #DemDebate pic.twitter.com/KMmdKS4SYV

WATCH: Tom Steyer says that climate change proves "America First" is the "worst idea I've ever heard, and I would change it on day one in every single way." #DemDebate pic.twitter.com/RFEk9pm7Gj

Watch our full coverage of the 4th Democrat debate below: