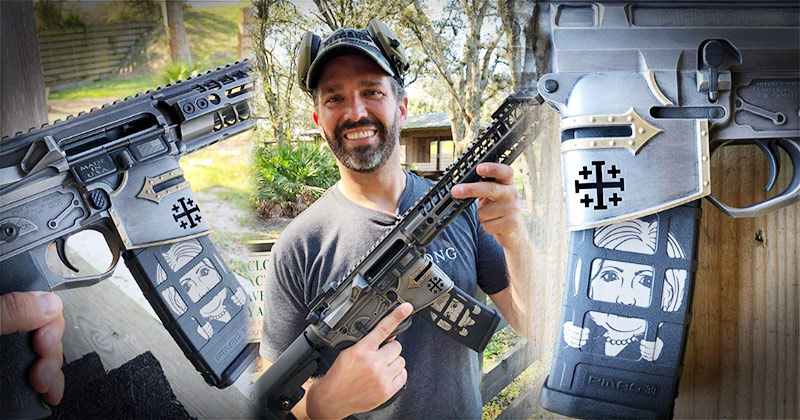 Donald Trump Jr. posted a set of pictures to his Instagram account on Sunday showing off a new AR-15 rifle equipped with a magazine showing a picture of Hillary Clinton in prison.

“Nice day at the range. Rare Breed Firearms and Spikes Tactical adding a little extra awesome to my AR and that mag… 🔥,” Don Jr. said in his caption.

Nice day at the range. @rarebreedfirearms and @spikes_tactical adding a little extra awesome to my AR and that mag…🔥🤣🔥🤣🔥

Unsurprisingly, liberals on Twitter freaked out and had to put their two cents in on the matter.

One blue checkmark user said, “I can’t wait til that treasonous little motherfucker Donald Trump Jr is in prison.”

Donald Trump Jr just posted a photo of himself holding an assault weapon with Hillary Clinton's picture on the side of it.

I can't wait til that treasonous little motherfucker Donald Trump Jr is in prison.

Trump Jr is a far right extremist and thug. The medieval fetish, part of global right culture, goes from Italy’s League led by Salvini to Bolsonaro’s Brazil and is about defending white European “Christendom.” https://t.co/Mr5UYXzTC0

Democratic strategist Peter Daou wrote, “These are loathsome people. Fake warriors. Weaklings. Cowards. In Lebanon, the real fighters I grew up with would have choice Arabic words to describe him.”

These are loathsome people.

In Lebanon, the real fighters I grew up with would have choice Arabic words to describe him.https://t.co/EVKVcrijgD

Daily Beast columnist Dean Obeidallah asked Trump Jr., “instead of showing off how you can kill animals or shoot at the range why not join US military so you can fight your dad’s war?”

Hey @DonaldJTrumpJr instead of showing off how you can kill animals or shoot at the range why not join US military so you can fight your dad's war? We know why-wealthy children like you prefer to send the poor to die for them. https://t.co/QqfCmtn3EM

In today’s totally normal news for a democracy, the president’s son—who a significant percentage of Republicans favor as his successor—posted photos of himself shooting a gun featuring an image of a crusader’s cross & his father’s former opponent in jail. So insane & appalling. pic.twitter.com/zYvHnOZL6Z

Akil N. Awan, a Senior Fellow at the Center for Global Policy, compared the Crusader imagery on the rifle to “propaganda used by Far-Right terrorists.”

Don Jr posted photos of himself brandishing a modified assault rifle with CRUSADER etched on it, lower receiver modelled after a medieval Crusader hemet & mag printed with Hillary's face.
Crusader imagery on weapons & propaganda has been used by Far-Right terrorists since Breivik pic.twitter.com/hLdgUAL7au

Tea Pain nominates @DonaldJTrumpJr to lead our ground assault into Iran. Who seconds that motion?https://t.co/uEuV1AwZ8D

All right. Let’s talk about Donald Trump, Jr posing with a gun adorned with crusader iconography as America teeters on the brink of a religious war, why the imprisoned Hillary Clinton image plays into apocalyptic white identity Christianity, and how this country got so screwed up pic.twitter.com/dcCB9VW0eC

@DonaldJTrumpJr is the personification of a micro penis with erectile dysfunction pic.twitter.com/MzMs372nE2

@DonaldJTrumpJr Where’d you get those horses teeth? You and Ivanka get a two for one? Oh and the weapon. You’re probably going to need it for your daddy’s new war! pic.twitter.com/UjMNZoKjFW

Fight through the bone spurs pic.twitter.com/hjMuiKzuc2

Donald Trump Jr shows off the present he got his girlfriend, Kimberly Guilfoyle – for their 1st anniversary together. pic.twitter.com/WCbk0Y4DwX