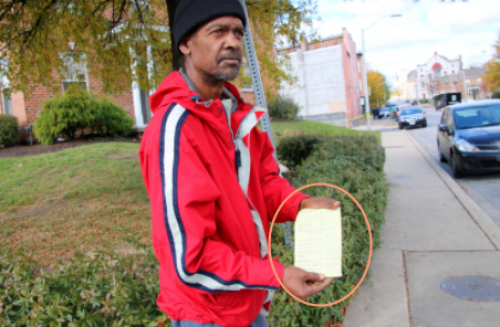 Five days ago, Det. Sean Suiter, a married father of five and an 18-year veteran with the Baltimore Police, was patrolling the streets of West Baltimore around 5pm last Wednesday when he saw suspicious activity.

Suiter approached a man and was shot point blank in the head, in a summary execution. He was rushed to the hospital in critical condition where he later died of his injuries.

In response, Baltimore Police reacted with ‘fire and fury’ turning the neighborhood where Suiter was shot into an “open-air prison”, shutting down city streets and enabling checkpoints for citizens while officers in tactical gear went door to door, according to Baltimore Brew. Residents were prohibited from entering their own neighborhood unless they showed proper identification, these extreme measures have been in place for 4-5 days.

“They’ve been to my house three times asking, ‘Did you hear anything? Do you know anything,’” said Edward Stanley, a local resident, who had to show a yellow slip before entering the neighborhood.

Baltimore Brew said, the neighborhood was tuned into “open-air prison”, as the complete lockdown was in attempt to collect evidence and search for the shooter.

Police initially said they needed to cordon off the area to try to capture the shooter. Police have said Suiter was in the 900 block of Bennett Place, investigating a previous homicide, when he was shot on Wednesday. So far, no arrests have been announced in the case. This morning, homicide detective Mike Newton told The Brew that the lockdown was necessary to collect evidence.
One community group took pictures of a checkpoint in West Baltimore.

15 @BaltimorePolice vehicles on Schroeder alone and dozens more on surrounding blocks. All the officers are just sitting in their cars. pic.twitter.com/M9zCCltdzK

Another twitter account describes how ‘the police declared marital law’, as one police officer with an assault rifle guards a corner.

And apparently police been standing on corners like this the last two days pic.twitter.com/y9Qrd2TSRe

Citizens describe how their day lives have been disrupted as West Baltimore remains under police control, as per Baltimore Brew:

Two women walking down Franklin Street to get to their cars, parked blocks away because of the lockdown, complained that they had been harassed by officers.

“They know I live here. They’ve seen me come and go. But this one had to pat me down. He [the officer] went like this to my jacket, grabbing it,” said Shelly, 25, who asked that her last name not be used.

“They wanted to know where I had been. Why do I have to tell him that? It’s just me in my flip-flops trying to go to my own home.”

“We haven’t been able to get our mail for four days,” said the woman with her, Samantha, 50, who also asked not be identified. “Is the city going to pay the late fees on my bills?”

“It’s so sad what happened to the officer and I hope they catch whoever did it,” another woman said. “But this is really overboard. I’ve never seen anything like it.”
The ACLU of Maryland released a statement yesterday, who are “troubled by reports that some persons entering or leaving the area have been subject to pat down searches, and that non-residents have been barred from entering the area”.

“While the search for a killer is, of course, a high priority for the police, the limits on lawful police behavior do not disappear even when engaged in that pursuit. And at least one federal appellate court has said that a similar police cordon and checkpoint system was unconstitutional.

“The residents of Baltimore, and, in particular, the residents of the affected community, deserve a clear explanation from the City as to why this unprecedented action has been taken, what rules are being enforced, and why it is lawful. The need to secure a crime scene from contamination to preserve evidence does not, on its face, explain the wide area to which access has been restricted for days after the incident.”

On-the-ground information is scarce to those outside the cordon because access to residents, including by the media, has also been restricted. For that reason, we encourage anyone who has this kind of information to contact us at [email protected]
WBALTV11 visited one checkpoint in West Baltimore:

West Franklin Street is back open to traffic.

According to one citizen, ‘this is the 3rd time in less than 3 years that West Baltimore has been occupied by police’…

This is the 3rd time in less than 3 years that West Baltimore has been occupied by police:

Baltimore Brew concludes by saying the Baltimore Police will “clear the crime scene” on Monday, so in a few hours.

Perhaps in a preview of things to come, the 4-5 day siege of West Baltimore by Police has been described by one resident as ‘Martial Law’. Readers concerned about social tensions in the US are urged to monitor events in Baltimore, which better than Chicago or Detroit now demonstrates just how the United States is marching straight into a new, Orwellian era.