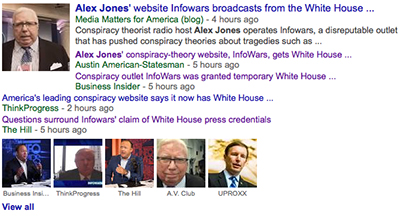 The mainstream media is melting down after Infowars received White House press credentials, underscoring how the establishment wants to monopolize the news coming from the White House to undermine President Trump.

An estimated 3,000+ news stories covered the Infowars article, which itself received over 14,000 direct shares on Facebook at the time of this writing.

But the mainstream media coverage is largely negative, highlighting how the establishment media will shed its supposed objectivity to desperately maintain control over public opinion.

“The outlet was reportedly granted only day-long press credentials, which are far easier to receive and viewed as less prestigious than a permanent pass,” wrote Business Insider in a hit piece like thousands of others.

Prestige? Who goes to White House press conferences for prestige?  The #1 goal of a journalist is to report the news, not to strut around in search of prestige.

And the public knows that.  That’s why trust in the mainstream media is at all-time lows.

Prestige is only a requirement if your news outlet is intentionally distorting the news and needs to bolster its image to counter accurate accusations of peddling “fake news.”

That actually explains why corporate media is freaking out: if independent reporters are allowed into White House press briefings, that denies the anti-Trump media the opportunity to misrepresent news about the Trump administration with impunity.

Sycophant journalists can only control public opinion if they stand between the truth and the people; that’s why they panic over the thought of competing with independent news sources like Infowars.

“More Americans than ever are losing faith in the establishment-controlled media and are seeking out alternative sources of information,” Michael Snyder of the Economic Collapse Blog wrote. “Is this a trend that the big media companies are going to be able to reverse at some point?”

Not likely, if this media meltdown is any indication.

Ask yourself, if Infowars is as insignificant as these articles want you to believe, then why are thousands of establishment journalists reporting on Infowars today?

Put it this way: do anti-aircraft gunners shoot flak into thin air, or do they wait until a formation of B-17s is flying right above the target?

Establishment journalists want to shoot down Infowars and any press they can’t control because their war against Trump can only work if they turn the public against the president though fake narratives, such as the “Russia collusion” fairy tale which lacks concrete evidence.

But tiny cracks of truth topple even the most colossal of lies – and that’s why major, corporate media is scared of small, independent press with a bias towards truth.