Recent documents released regarding the October 1, 2017 Las Vegas Shooting are beginning to shed light on more discrepancies and abnormalities surrounding the official timeline and narrative of the tragedy as originally stated by Sheriff Joe Lombardo and Special Agent Aaron Rouse of the Las Vegas FBI, including documentation that three women were found in the alleged shooter’s room.

The most recent batch of documents that were released include witness reports, dispatch logs, and officer reports that recount the events that took place that night and further reveal that Paddock was not alone in his room as was first stated by Sheriff Lombardo.

Page 26 of the dispatch logs that were released by LVMPD details the moments when the alleged shooter, Stephen Paddock, was located by a security detail at the Mandalay Bay. As actions were taken to assemble a team of officers to apprehend the suspect, a dispatcher shared the name of the alleged shooter located in Room 32-135, along with three females that were reported to be in the room with Mr. Paddock. However, the names of those three women are redacted from the report, while the checkout date listed for the women aligns with Paddock’s planned check out date of October 2, 2017. In the log, as seen on page 26, the following was documented as having taken place at 11:02 pm the night of the shooting when police breached Paddock’s room. “Units in control room 32 135. Suspect name of K(P)addock, Stephen. There three females in room.”

Shocking details such as the one above are found all throughout the nearly 2,000 documents that were released following a court order after The Associated Press and additional media outlets had to sue the LVMPD for the release of this information, information that the public has the right to see, as there are many questions left unanswered due to communication shut down by Sheriff Joe Lombardo of the Las Vegas Metropolitan Police Department.

Other details revealed in the dispatch log include calls that were made to report multiple gunshot wounded victims hiding in fear for their lives all over the strip. There were panicked calls made from Sundance Helicopter about possible hostages taken.

The details of the LVMPD dispatch log on page 26 specifically reveals that dispatch received information from Mandalay Bay regarding guest names, additional parties in the room, along with check-in and departure dates for Paddock and the three women found in his room, all of which completely contradicts information given to the public in early reports from LVMPD and Sheriff Lombardo. In press conferences held shortly after October 1, Lombardo specifically stated that Paddock checked into his suite at Mandalay Bay on September 28th, 2017 and that he stayed in the room by himself.

Sheriff Lombardo was challenged on the initial timeline by investigative journalist Laura Loomer at a live press conference based on evidence to support an earlier check-in date of September 25, 2017, and only then after being exposed as a liar on live TV did he provide the correct details. The newly released logs provide documented proof that Lombardo was aware of the check-in date of Paddock and his guests.

LVMPD and FBI have maintained for almost eight months that Stephen Paddock was a lone gunman. Their reports state that he did occupy two rooms during his stay, the 32-135 suite and an adjoining room, 32-134, which was registered under his girlfriend’s name, Marilou Danley.

Information within the official LVMPD reports also stated that Ms. Danley was out of the country on a trip to the Philippines at the time of the shooting. Despite her fingerprints being present on ammunition, and her own personal admission of helping Paddock load ammunition into his guns, LVMPD maintains she is no longer a suspect in the shooting. 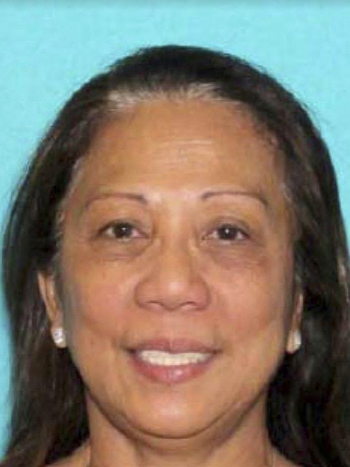 However, police documentation of the three females who were found in Paddock’s room, and whose identities have been redacted from the logs, leads to questions of additional persons of interest involved, including Marilou Danley. There are several witness accounts that state Danley was in town with Paddock, and had foreknowledge of Paddock’s talks about a potential shooting at an open air concert.

One of the recently released witness statements includes a witness who recounts seeing Danley and Paddock at The Noodle Shop the Friday before the shooting. A hairdresser shared a wild story of Paddock rambling about an open-air concert and easy access for shooting. The hairdresser claims she shared her concerns with Ms. Danley and reported them both to the police, according to her statement.

There are also dispatch logs showing that the night of the Las Vegas shooting, LVMPD knew that Danley had followers on her Facebook page who showed ISIS “beheading videos” on their Facebook pages. While independent journalists were first to report that Danley deleted her Facebook page immediately following the Las Vegas shooting, it was later confirmed in January of 2018 when police search warrants were released. It is also worth noting that immediately following the Las Vegas shooting, ISIS claimed responsibility for the shooting, claiming Paddock was an ISIS terrorist who converted to Islam six months prior to the attack. Even after the FBI said ISIS wasn’t involved, ISIS has continued to take responsibility for the Vegas shooting nearly four times, and has even published ISIS propaganda since the shooting in which they promise to attack Vegas again.

Besides proving that the public has been misled about Paddock being alone in his suite at Mandalay Bay, dispatch logs confirm that Sheriff Lombardo had knowledge of the accurate timeline and check-in date, as well as the three women the public is just now learning about when he held his press conference the day after the shooting, where he intentionally gave the public misinformation.

Although LVMPD and the FBI have remained adamant that Paddock was a lone shooter who acted alone without any outside help, these newly released police logs and witness statements are further evidence that there are possibly additional suspects or people of interest who were not mentioned in Lombardo’s press conferences, or at any time within the eight months that have passed since the horrific shooting.

Despite the new details in the logs, investigators have yet to provide a motive for Stephen Paddock, or any additional information that gives the public any answers or understanding as to why a gunman or gunmen decided to open fire from a 32nd floor hotel suite onto a country music concert, killing 58 people and injuring nearly 800 more. Yet, there continues to be multiple inconsistencies in what was originally stated by Sheriff Lombardo and the LVMPD.

In the coming days as more of the logs and witness statements are examined, more shocking information about the Las Vegas shooting will come to light. Information regarding the Las Vegas shooting that has yet to be processed and released includes more than 20,000 hours of video footage, 251,099 images, and thousands of witness accounts and police phone calls.

In the meantime, the citizens of Clark County must decide if the lies, misinformation, deception, and corruption that has been demonstrated by Sheriff Lombardo, and proven in these newly released documents is the type of leadership and protection they are comfortable with in the upcoming election for Clark County Sheriff.

This article appears courtesy of LauraLoomer.us.

Laura Loomer is a conservative investigative journalist and activist. Originally from Arizona, Laura began her career working as an undercover journalist for Project Veritas from 2015-2017. She covers politics, anti-Semitism, immigration, terrorism, the Islamification of the West, and voter fraud. Loomer’s investigations have been broadcasted on every major national mainstream media outlet in the United States, as well as many international publications.