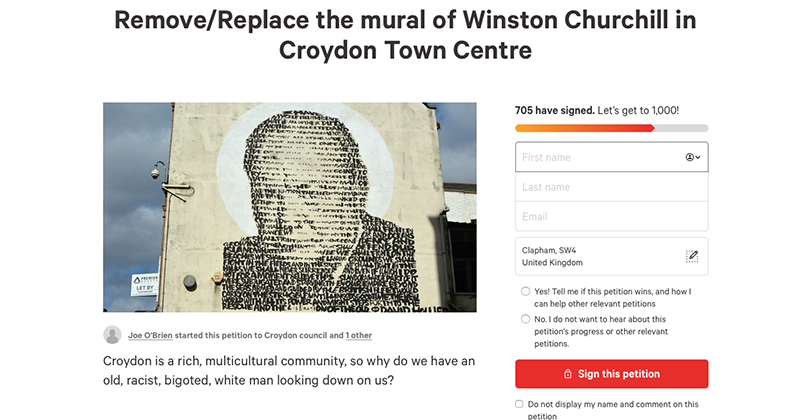 A petition to remove a mural of Winston Churchill is receiving attention after a London councillor promoted it and declared he is “Proud to be standing up for what’s right.”

The petition on Change.org targets the mural of Churchill that resides on a building side in Croydon, an area of London with a more than 50% BAME population.

The creator of the petition, Joe O’Brien, writes “Croydon is a rich, multicultural community, so why do we have an old, racist, bigoted, white man looking down on us?”

“Whatever you opinions on him being a ‘war hero’, he led atrocities in Ireland, Kenya, and India which still have lasting repercussions today. He is a controversial figure who was openly bigoted and racist.” O’Brien adds.

“With the Black Lives Matter movement gaining momentum, I think removing this mural and replacing it with something reflective of Croydon would be an important demonstration of solidarity.” O’Brien concludes, adding that “Churchill wouldn’t like our community.”

The petition was promoted on Twitter by Croydon Labour councillor Chris Clark:

I've signed this @UKChange petition calling for the removal or replacement of the mural of Winston Churchill in Croydon Town Centre – please sign and share. https://t.co/L7igBtcjuW

Clark told reporters that “I knew not everyone would agree with the sentiment behind the petition, but I think it raises an important point about the way history is understood in this country, and I think sharing it was absolutely the right thing to do.”

“I think it’s important that people have a 3D view of our natural history, rather than buying into a nostalgic celebration of our imperial past.” Clark added.

Responses to the councillor’s support of the petition drew mixed responses on Twitter, with some lambasting the move. Clark responded to a supporter, saying that he was “Proud to be standing up for what’s right.”

Thanks Emily. Proud to be standing up for what’s right. ✊🏻

Clark responded to critics who referenced Chuchill’s refusal to surrender to Hitler:

His central role in defeating the Nazis should be celebrated – his less positive actions (Tonypandy, Bengal) should be remembered too

The mural, made up of extracts from Churchill’s personal journal, has been present for almost 4 years, and was painted by Brooklyn-based artist David Hollier.

A second petition to remove the mural has also appeared, and now actually has had more people sign it.

This one calls on the council to remove the mural and replace it with work “created by artists from our BAME community”.

The creator states “With recent events both in the US over the killing of George Floyd and demonstrations here, including the toppling of the statue of Colston the slave trader in Bristol, focus is shifting towards interrogating Britain’s colonial past.”

“Churchill was in no doubt a racist and a white supremacist.” the petition further states.

Should the mural of Churchill be removed, Croydon residents will still have to look at the leader’s face every day anyway, given that Churchill is pictured on every five pound note in the country.