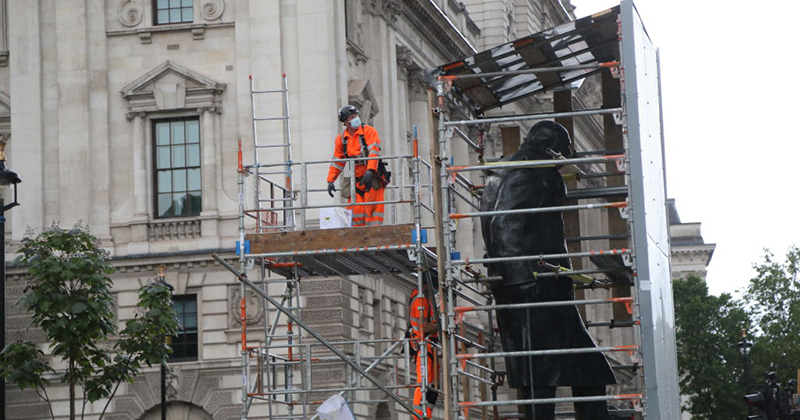 London mayor Sadiq Khan spent more than £30,000 on boarding up statues in Westminster including one of Winston Churchill, it can be revealed.

The monument to the wartime leader was boxed up by Mr Khan after it was daubed with graffiti during Black Lives Matter demonstrations last month.

Underneath Churchill’s name, protesters had daubed ‘is a racist’.

The Greater London Authority, run by the mayor, put hoardings around three statues in Parliament Square ahead of further protests.

Savanah Hernandez joins Alex Jones and Owen Shroyer to breakd won her recent attack at the hands of a BLM mob while peacefully protesting.

Figures released under the Freedom of Information Act show it cost £10,147 to put a hoarding around the statue of Churchill.

A further £21,115 was spent on protecting statues of Nelson Mandela and Mahatma Gandhi.

The GLA said it cost £3,050 to remove graffiti in Parliament and Trafalgar squares.

Churchill’s statue was boxed up on June 12 but the boarding was removed six days later ahead of a visit by French president Emmanuel Macron.