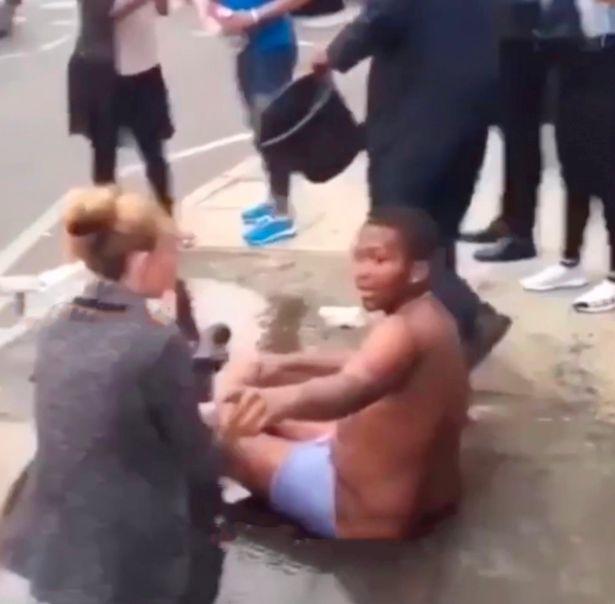 Shocking video purporting to show an acid attack in progress went viral after it was uploaded to the internet.

Though over the weekend it was unclear exactly what had happened in the dramatic footage showing two men throwing something into a vehicle on a London roadway, after which two victims frantically got out of their car while stripping and shaking violently, London police have now confirmed it was the second in a series of acid attacks which occurred last Friday.

On Monday Scotland confirmed that three men had been injured in separate acid attack incidents within hours of each other in east London. It was the first attack, which was not caught on film, in which the perpetrators had donned face and body concealing burkas. A subsequent attack, however, was caught on film and showed hooded men jump out of a car to throw acid inside another stopped vehicle.

Two men were also injured in a second incident in Cricketfield Road near Hackney Downs shortly before 7.30pm the same day.

The reported second attack, which was caught on film, did not appear to show the attackers “wearing burkas” at the time but instead a pair of men wearing hoods — however, this is apparently what the attackers had donned during the first incident.

Tune in to Today’s Live Monday Spits Truth In The Face Of The Globalist Lies and Exclusive Google Whistleblower Information Is Revealed By James O’Keefe.

The full events of the second acid attack last Friday were captured in shocking video:

Shocking images of Acid Attack recorded exactly when the guy was throwing it to the two males inside the car in east London. pic.twitter.com/0BhkUlTab1

It’s also possible there were different attackers in the separate incidents, and no arrests have been made, according to police statements.

A single victim from the first, earlier morning attack, had also been treated for “non-life threatening” burn injuries.

A police spokesman said of that prior attack: “It is alleged that the victim had been approached by two suspects, both wearing burkhas, and had the substance thrown at him before they fled in a waiting car.”

Of the subsequent incident caught on film, the UK Mirror describes the graphic video of the assault on the men in the car as follows:

The men are seen stripping off their clothes, writhing and screaming in pain before the video cuts to an end.

Witnesses said that a car chase had taken place just before the attack, with one vehicle being driven off the road into a wall.

One of the victims of the Hackney attack later posted a widely shared Instagram photo and message vowing revenge upon his attackers, saying, “You fucked up, you should’ve killed me.”

Serious burns could be seen on his skin in the aftermath of the acid which was splattered across the man’s face.

The first, prior attack involved burka-wearing individuals approaching a market stall in the early morning hours to attack 45-year old Djamil Mogdad, who was preparing to open his clothing shop at the time.

The Mirror reported the harrowing details of that attack as follows:

Djamil Mogdad was setting up his clothes stall at Walthamstow Market at 6.40am on Friday when he was reportedly tapped on the shoulder by two men.

Bystanders said they then threw acid in the dad’s face before running off and escaping in a car parked nearby.

Mr Mogdad, 45, fled into a shop for help, with his face in his hands and screamed: “Someone has poured acid on my face”.

Last year the Metropolitan Police insisted that London “remains one of the safest cities in the world,” which has been a continued theme of knife-banning mayor Sadiq Khan.

Watch two males throw acid into a car and the occupants run out to try to escape their burns.

However, London has also in the past few years been dubbed by the media the “acid attack capital of the world” given the dramatic rise of this heinous trend.

This latest series of attacks – the first of which included the perpetrators hiding behind burkas – is likely to fuel controversy surrounding a potential UK ban of full Islamic face and body coverings. Both the burqa and niqab are under consideration, with the former obscuring all parts of the face and body, preventing even seeing the person’s eyes.