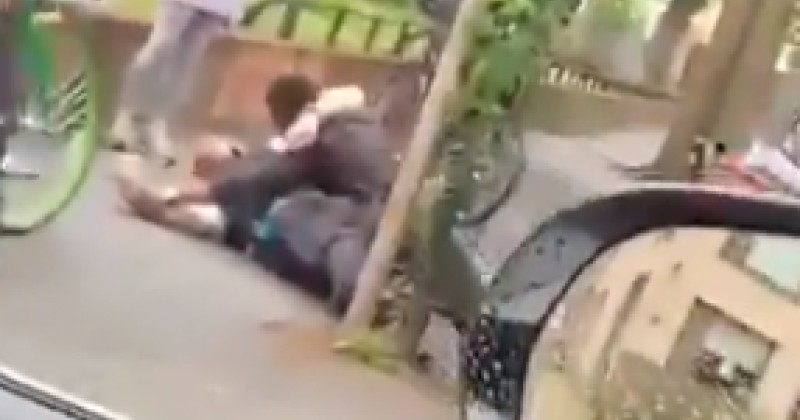 A white police officer was attacked by thugs just a stone’s throw away from where a George Floyd ‘take a knee’ event was simultaneously taking place in Hackney, London.

The video clip shows the two police officers, one male, one female, struggling with a group of black men as they try to make an arrest.

This happened as a ritual 'take a knee' event was taking place a stone's throw away. pic.twitter.com/fUaEteHSNQ

One of the men appears to kick the male officer in the head as he tries to wrestle another man to the ground. Another seems more interested in taking photos for social media as the mayhem ensues.

Another individual involved in the melee is carrying a baseball bat.

UK Home Secretary called the attack “sickening,” while the Police Federation said, “We are not society’s punch bags.”

In an added twist of irony, a protest event to honor George Floyd and Black Lives Matter was taking place just a stone’s throw away outside Hackney town hall.

People in Hackney have turned out to stand in solidarity with the Black Lives Matter movement & in memory of George Floyd pic.twitter.com/jmLxXU1nxu

During the event, attendees ‘took a knee’ to protest police brutality – while a police officer was being brutalized by a criminal mob 5 minutes away.

For an idea of what Hackney is like, the photos below provide a pretty good summary.

As you can see, diversity really is a strength.