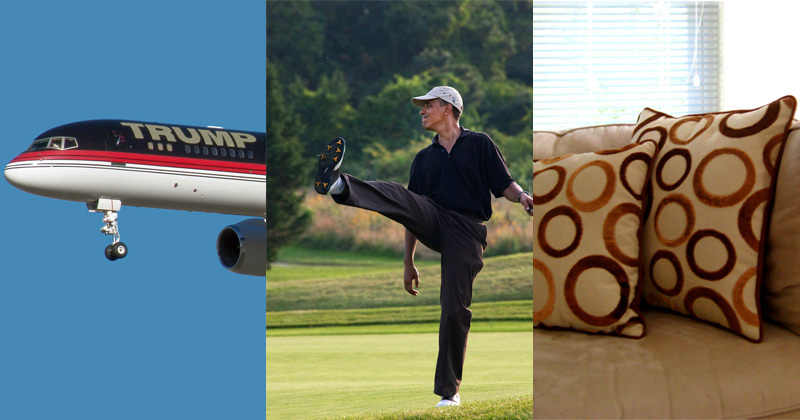 Donald Trump is meeting the victims of the Louisiana floods on Friday – while President Obama golfs and Hillary Clinton naps.

It’s ironic – yet revealing – how the GOP nominee who made millions building golf courses is visiting the flood-ravaged areas of Baton Rouge while Obama, who once criticized then-President Bush for his mishandling of Hurricane Katrina, plays on golf courses.

In fact, Obama just played his 300th round of golf as president.

“I think my irons are good, my drive is straight but unimpressive in length, and my putting’s decent, chipping is OK,” he told the Golf Channel.

It’s quite likely Obama has spent more time on golf courses over the past year than Trump, despite the latter owning several courses across the world.

Meanwhile Hillary is no where to be found; her last public appearance was on Wednesday and she has no scheduled events until Sunday, underscoring her lack of energy and poor health overall.

At least Obama has the energy to golf; Hillary can barely stand up for long periods of time.

“She makes the speech, she turns off the teleprompter,” Trump said. “Look, what happens, she gives a short speech then she goes home, goes to sleep, she shows up two days later.”

In fact, numerous photos and videos suggest Hillary has trouble standing unsupported for extended periods of time, which is why she constantly uses chairs as makeshift crutches while giving speeches.

Hillary also apparently suffers from Parkinson’s or a similar disease and experiences seizures from flashing lights, sources inside the Secret Service told Infowars.

In addition, Hillary has experienced several seizures and near-comatose freeze-ups during speeches which, combined with her previous blood clot, concussions and severe coughing fits, reveal she’s hiding serious medical issues that jeopardize her ability to hold public office in general, much less the White House.