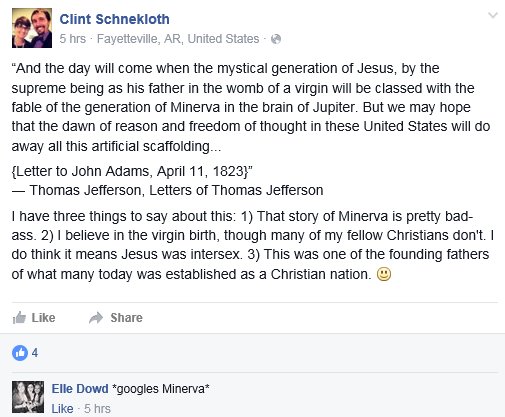 Amid the national debate over transsexual bathrooms, an influential Lutheran pastor claimed Jesus was “intersex.”

The pastor, Clint Schnekloth, made the claim while quoting a Thomas Jefferson letter advocating a materialist interpretation of the Bible.

“I believe in the virgin birth, though many of my fellow Christians don’t. I do think it means Jesus was intersex,” he stated.

“Intersex” is a term used by LGBT advocates to describe people born with both male and female sexual anatomy and other traits.

Schnekloth, who’s also a well-known author and speaker in the Evangelical Lutheran Church of America, is well-respected by other church leaders and thus wields a great deal of power: he controls two of the largest ELCA Facebook pages and writes content for worship resources.

So his “intersex” statement reflects not just the opinion of one church pastor but rather how major churches in general are turning into powerful vehicles to promote a social justice warrior agenda.

Last year, for example, the Church of England wanted Christians to God as a ‘she,’ despite Jesus referring to God as His Father.

Women and the Church (WATCH), an activist clergy group best known for pressuring the Anglican Church to accept female bishops, wants to modify the official church liturgy to include female language and imagery to describe God.

“In the last two or three years we’ve seen a real resurgence and interest in feminism, and younger people are much more interested in how gender categories shouldn’t be about stereotypes,” the Rev. Emma Percy, a member of WATCH, told the Guardian. “We need to have a language about God that shows God can be expressed in lots of diverse terms.”