Just when you thought it was safe to come out from your air raid shelter after Bibi returned from his U.S. foray to stoke up war fever, Maariv raises the temperature to a boiling point.  Ben Caspit reports (Hebrew) that the cabinet now has, for the first time, a majority (eight votes for, six votes against) favoring the measure.  This means that theoretically Bibi can begin an attack at any time.  Of course, it could mean something different: it could mean the cabinet has approved a strike at any point in future with Bibi determining the timing.  So it doesn’t necessarily mean the F-16s will fly tonight or tomorrow.  But it could:

The prime minister yesterday delivered one of the most combative and explicit speeches in the history of the Iran affair.  Several cabinet ministers said in private conversations that it sounded like a “speech preparing for war.”

Political sources judge that the prime minister has a majority in the cabinet which favors a military strike against Iran, even without American approval.  Yesterday, Netanyahu said he wouldn’t hesitate to attack Iran even without the approval of Pres. Obama…A senior official said Bibi believed it would be best not to wait for the November presidential elections because he didn’t trust the president to deal with the problem after the election. 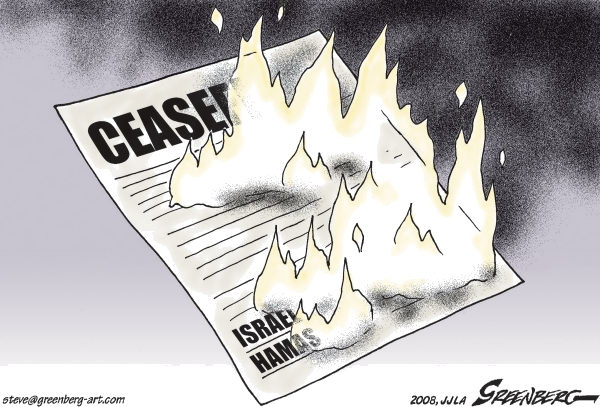 Bibi’s speech sounds like it was a real stem-winder.  Among new crackpot theories he’s developing: the Gaza fighting wasn’t Israel’s fault (even though the IDF initiated it by assassinating a Popular Resistance Committee leader who was allegedly planning a terror attack).  No, the whole Gaza mess was Iran’s fault.  Yup.  You didn’t think Iran earned the sobriquet “the evil empire” for nothing did you?  Oh, wait, that was the Soviet Union in the Reagan era now, wasn’t it?  Plus ca change…

Iran not only supplies missiles to Gaza it plans to offer Palestinian “terrorists” a nuclear bomb it doesn’t even have:

“The dominant force behind the events in Gaza is not the Palestinians, but Iran,” Netanyahu said. “The terror groups there stand under an Iranian umbrella. Imagine to yourselves what will happen when that umbrella is armed with nuclear bombs.”

Here’s more of the speech:

Sooner or later Iran’s terror base in Gaza will be uprooted.  Iran is what is happening inside Gaza.  Where does the funding come from?  Iran.  Who equips the terrorists?  Iran.  Who builds the [terror] infrastructure?  Iran.  Gaza is Iran’s frontline.

So much for Bibi’s lies.  It makes you wonder how he can say this crap with a straight face.  The Palestinians, who live there, aren’t even to blame for events in Gaza.  It’s those puppeteers 1,000 miles away in Teheran who pull all the strings.  The locals are just marionettes.

The Russian newspaper Kommersant wrote (Russian) that Hillary Clinton told her Russian counterpart that he should tell the Iranians that the upcoming April nuclear negotiations would be the “last chance” to resolve the issue diplomatically.  If the article is to be believed, this was basically a threat to the Iranians that if they didn’t deal, failure of the talks would be followed by war:

Russian diplomats at the United Nations believed it was a “matter of when, not if” Israel would strike against Iran.

What this has become is a game of chicken.  Bibi and Barack go eyeball to eyeball with Khamenei and wait till one of ‘em blinks.  As I’ve written before, I’m putting my money on Iran.  I think Obama is an empty suit.  But even if he does go to war, he can’t fully quell Iran’s resistance.  Further, Obama will not be willing to do an Afghanistan or Iraq and invade Iran.  He doesn’t have the will or support among the American people for such an adventure.  The Iranians, though they might fold out of a sense of imminent threat, would seem to end up being stronger if they don’t.  If Israel attacks alone, the Iranians are in even better shape since the Israelis can do less damage than the Americans.  If the Israelis and Americans attack together, they still can’t complete the job.  They can neither bring regime change nor subjugate the Iranian will.  At most they “mow the lawn” to quote another one of those disgusting IDF slogans that substitute for real military strategy.  That means, Iran will eventually return to the agenda in a year or three.  When it does it will be stronger, more seasoned, more bitter, more implacable.  And we will have only ourselves to blame.