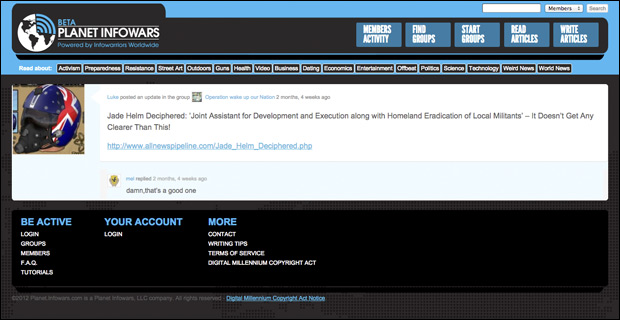 The mainstream media is attacking critics of Operation Jade Helm, including Alex Jones and Infowars, in an attempt to steer public opinion in favor of the domestic military drill.

For example, in an article entitled As Jade Helm 15 Military Exercise Begins, Texans Keep Watch ‘Just in Case’, the New York Times referenced a non-existent Infowars “report” to claim that Infowars “suggested the name Helm was an acronym for Homeland Eradication of Local Militants,” but a quick search on Google reveals zero Infowars reports making that statement.

In fact, the only reference to that statement on Infowars.com was made by an Infowars reader named Luke who posted a link to an All News Pipeline article not affiliated with Infowars which made that claim.

To put that into perspective, that’d be like if the Zulu Times, for example, claimed The Los Angeles Messenger made “XYZ” statement because a commenter on a L.A. Messenger article posted a link to a Topeka Dispatch report making that claim.

Not surprising, the New York Times doesn’t link to the Infowars “report” because it doesn’t exist.

Salon, for example, claimed that Jones’ rants against political correctness could get gay people “killed.”

And in what’s perhaps the most bizarre example, a July 15 report by Top Secret Writers claims a “YouTube video featuring Alex Jones” attacked the U.S. Marines’ Toys For Tots program even though Jones is not in the 2008 video embedded in the article and it wasn’t produced by anyone affiliated with Infowars.

It appears that instead of having a rational debate over Jade Helm, the mainstream media would rather use fallacious ad hominem attacks against its critics.