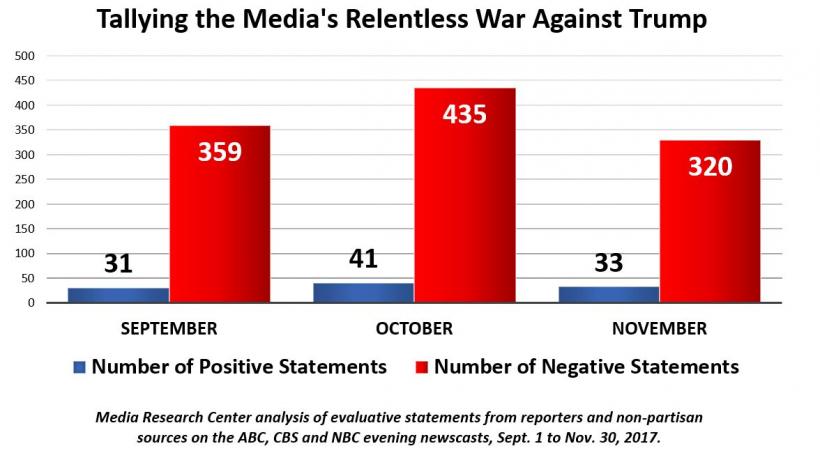 President Trump once again attacked the “fake news media” on Twitter Wednesday, this time highlighting a report claiming 90 percent of press coverage about him is negative.

“Wow, more than 90% of Fake News Media coverage of me is negative, with numerous forced retractions of untrue stories. Hence my use of Social Media, the only way to get the truth out. Much of Mainstream Meadia [sic] has become a joke!” the president wrote, tagging the Fox & Friends twitter account.

Wow, more than 90% of Fake News Media coverage of me is negative, with numerous forced retractions of untrue stories. Hence my use of Social Media, the only way to get the truth out. Much of Mainstream Meadia has become a joke! @foxandfriends

Trump was referring to the results of a study conducted by the Media Research Center (MRC) released Tuesday, which found statements made on ABC, CBS and NBC evening newscasts regarding the president were overwhelmingly negative compared to positive statements.

The MRC examined comments made on The Big Three networks from Sept. 1 through November 30 and estimated 90 percent of statements were negative.

“As the Media Research Center has been documenting all year, the media have approached the Trump presidency with unrelenting hostility,” NewsBusters’ Rich Noyes wrote. “Our latest numbers show that coverage of Trump on the ABC, CBS and NBC evening newscasts in September, October and November was more than 90 percent negative.”

The president’s comment regarding “numerous forced retractions of untrue stories” were in reference to the last two weeks of bad reporting and retractions from numerous media outlets.

ABC’s Brian Ross kicked off the recent fake news spell with a false report claiming Trump had directed Mike Flynn to reach out to Russia amid his candidacy. It turned out the president had directed Flynn to do that after he won the election. The report resulted in Ross’ suspension.

CNN followed with an embarrassing “correction” to a report claiming Donald Trump Jr. had received exclusive access to Wikileaks emails before they were released – however the network later learned the emails were from a later date and already publicly available.

This week CNN was again criticized for covering Trump’s reported Diet Coke habit, rather than breaking news of a thwarted terror attack which targeted the New York City subway system.