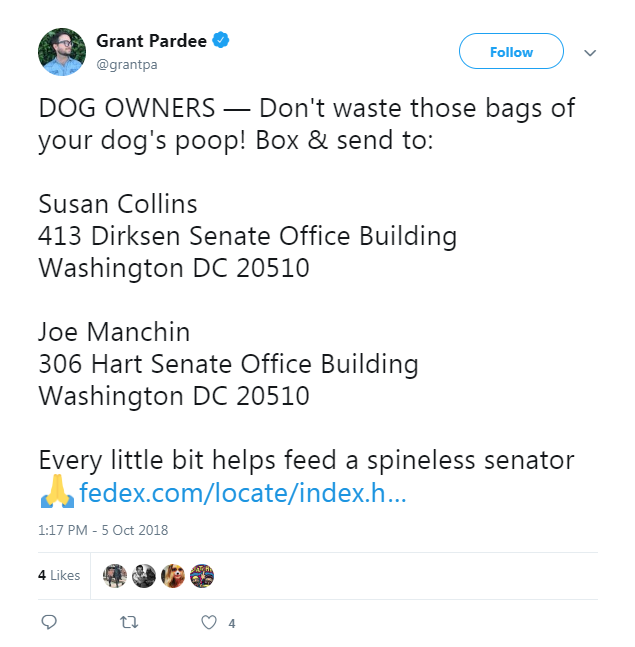 Republican Senator Susan Collins delivered a passionate speech Friday, explaining why she will be voting yes to confirm the Supreme Court nomination of Brett Kavanaugh.

“Our Supreme Court confirmation process has been in steady decline for more than 30 years. One can only hope that the Kavanaugh nomination is where the process has finally hit rock bottom,” Collins said.

Sen. Susan Collins: "Our Supreme Court confirmation process has been in steady decline for more than 30 years. One can only hope that the Kavanaugh nomination is where the process has finally hit rock bottom." https://t.co/N5yMUp1dH3 pic.twitter.com/fGwmycDh8O

Collins mentioned the fact that Democrats pledged to “resist” Trump’s SCOTUS nominee regardless of who he selected.

.@SenatorCollins on Kavanaugh nomination: "The president nominated Brett Kavanaugh on July 9. Within moments of that announcement, special interest groups raced to be the first to oppose him." https://t.co/RYjqte19Tw pic.twitter.com/u2BvF6FsSx

Further justifying her decision, Collins clarified that she does believe Blasey Ford’s testimony is sincere, but that “the four witnesses she named could not corroborate any of the events.”

“I found [Christine Blasey Ford’s] testimony to be sincere, painful and compelling. I believe that she is a survivor of a sexual assault and that this trauma has upended her life. Nevertheless, the four witnesses she named could not corroborate any of the events,” Collins said. pic.twitter.com/Fwav18AXWA

During one segment of the speech, Collins addressed the importance of assumption of innocence and slammed allegations brought forward by Democrat lawyer Michael Avenatti’s client that Kavanaugh drugged and gang-raped women in high school.

“…but of the allegation that when he was a teenager, Judge Kavanaugh drugged multiple girls and used their weakened state to facilitate gang rape. This outlandish allegation was put forth without any credible supporting evidence,” she attested.

Avenatti responded to the senator, saying, “Susan Collins should be ashamed of herself.”

.@SenatorCollins should be ashamed of herself for attacking my client and Dr. Ford. How did she make a credibility determination as to my client? How is she qualified to do that without ANY investigation? She did ZERO to determine whether my client and her witnesses were credible

Liberals are already calling for top Democrats to run against Collins, with Obama-era National Security Advisor Susan Rice reportedly being among the first volunteering to run against her.

.@AmbassadorRice, who was Obama’s national security adviser, bluntly responded to a tweet, angry about @SenatorCollins, asking who would run against Collins in Maine. She tweeted: “Me.” https://t.co/P5OUixtFIv #Resist #StopKavanaugh

The apoplectic response from the left has been predictable.

Pissed and disappointed in Senator Susan Collins of Maine.

The Republican Party has wagered that every single woman who has ever been assaulted will not care about the Kavanaugh vote.

I cannot WAIT for voters to prove how WRONG they are.#VoteThemAllOut

"Me too matters," Said the hypocrite @SenatorCollins as she suggested Dr. Ford lacked the memory recall to recollect her own rape.#KavanaughConfirmation

Susan Collins represents the white women who'll throw everyone under the bus for personal power https://t.co/6RUEQhtfZy

If I understood Susan Collins correctly, it's important to listen to women, then avoid eye contact and back away slowly until nothing changes.

Collins is pounding her desk in defense of Dr. Ford, calling her a "survivor." But she just finished saying she doesnt believe her story. There is so much bad faith in this speech.

Susan Collins stabs women in the back for her fellow Republicans https://t.co/K1FOPL0Zhr

Susan Collins says she will vote to confirm Kavanaugh, partially because the man who lied repeatedly in his confirmation hearings told her he considered Roe “settled law.” Senator Collins, there is still time to change your mind and do the right thing.

We are all rightly pissed at Susan Collins, but let's save at least some of the outrage for Joe Manchin, a Democrat, who also just sold women out and was way more cowardly about it.

As women were being assaulted on the floor of the Senate today, Susan Collins locked the door and turned up the music.

in case u missed it here is sen. susan collins speech to the women of america pic.twitter.com/yOn7DwlKKU 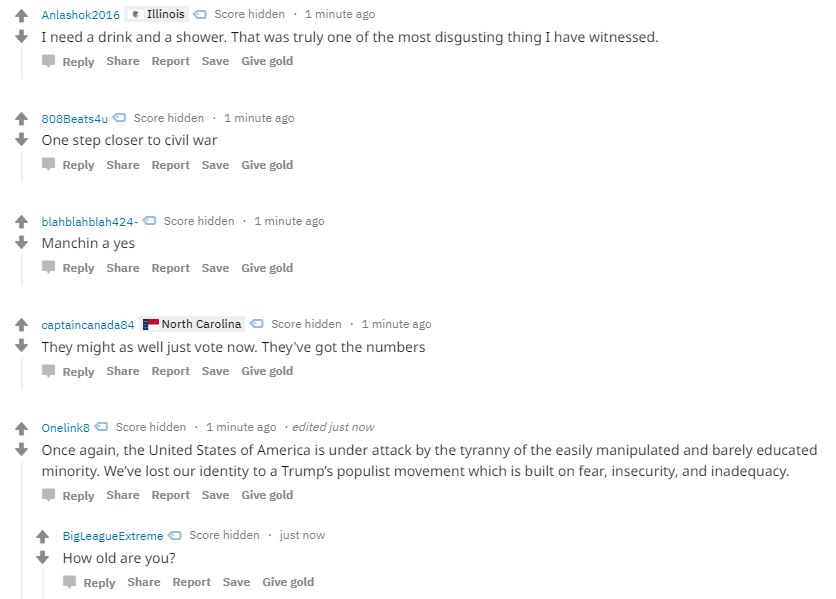 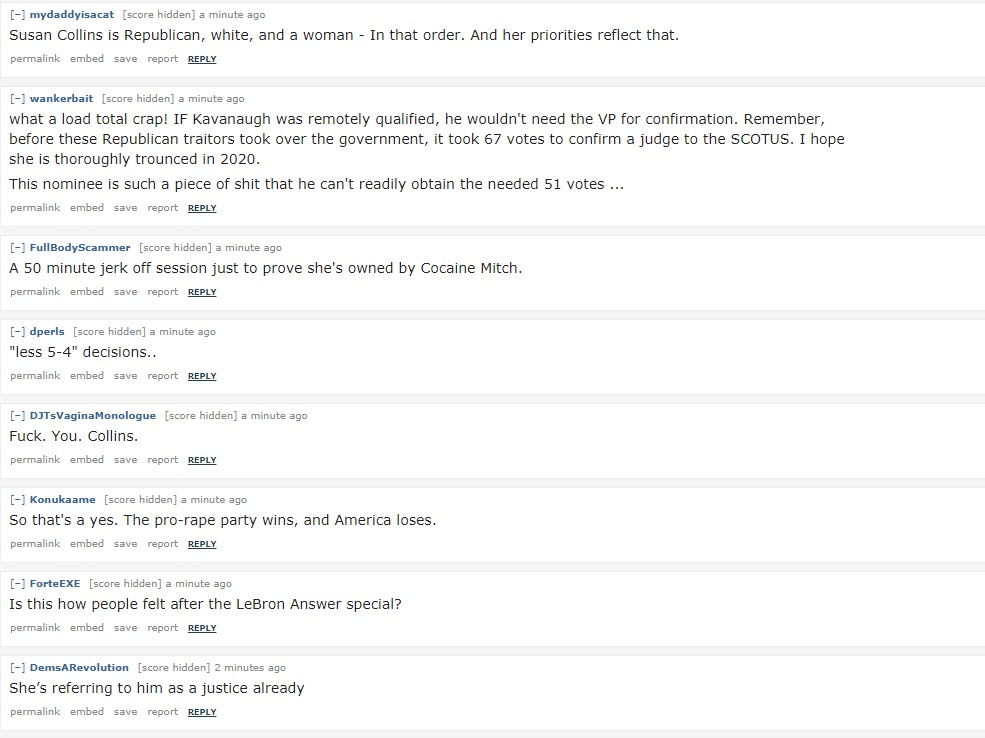 Watch Collins’ full speech below or click here to read the full transcript: