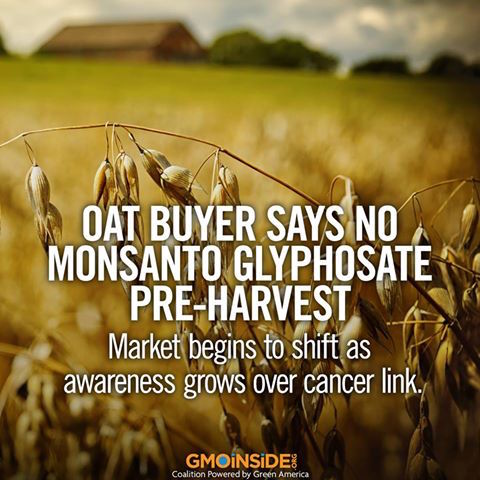 Major oat buyer Grain Millers, based in Western Canada, announced that it will no longer source oats that have been coated with glyphosate.

“In an April 20 memo to Prairie oat growers, Grain Millers said the new policy was ‘driven by functional performance attributes of finished products manufactured from oats known to have been treated with glyphosate and by customer demand.’ [1]

For years scientific data has conclusively proven that the primary active ingredient found in Monsanto’s best-selling herbicide Roundup — glyphosate — is highly toxic to plants, dangerous to animals, and can be detrimental to human health. Unfortunately, Roundup (as well as other glyphosate-containing herbicides) also happens to be the world’s number one weed killer with no signs of slowing down … until now.

One major oat buyer has now stepped forward to reject glyphosate-treated oat crops. Having consistently experienced and seen the actual damage that Roundup does to the oat crop, Grain Millers has rejected it.

Why would any company accept such an inferior food product when organic alternatives are readily available? Likewise, why would oat farmers continue to pay for herbicide applications which cause such obvious and predictable damage to their yearly harvests?

But seemingly more importantly (to companies, at least), why would companies continue to choose pesticides and GMOs when consumers are demanding organic and non-GMO? This is actually the driving force behind the recent changes instituted by many companies.

“Terry Tyson, Grain Millers procurement manager in Yorkton, Sask., said the company has been considering this policy for a few years.

About three years ago they started to notice problems with oat groat quality, which resembled frost damage, but weren’t sure about the cause.

‘When mills cut, flake or roll the groat, it is chalky, it’s brittle, it breaks apart and the finished product doesn’t make spec, in terms of granulation or absorption,’ Tyson said.

‘The groat integrity is affected much like an early frost affects groat integrity…. (But) frost damage you can see on the groat. You can control it… by rejecting a truckload or carload…. The damage with this issue is somewhat subtler.’” [1]

Their are a number of important takeaways from this excellent sleuthing.

“In March the World Health Organization issued a report on glyphosate, the active ingredient in Roundup, and four other pesticides. WHO experts concluded that glyphosate is probably carcinogenic to humans.” [1]

As more and more farmers and food processors identify the various ways in which glyphosate-treated crops are clearly substandard (and unnecessarily toxic), there will likely be a noticeable change throughout the Agriculture and Food Processing Industries.

The day may not be far off when similar press releases are issued by many more companies terminating their use of glyphosate herbicides, once and for all.