One of Sweden’s biggest newspapers has called for new regulations on motor vehicles in Stockholm after Friday’s massacre involving a terrorist who stole a delivery truck and drove it over the bodies of innocent victims on the city’s busy sidewalks.

While there have been many morbid jokes about the need to “ban assault trucks” as jihadists have chosen vehicular people-slaughter as their favored method for mass murder, Eva Franchell of Aftonbladet has penned an article that brings the meme to life, and highlights the depths to which the socialist-globalist Swedish establishment are willing to force their society in dhimmitude to the Islamic invasion.

“Cars have turned into deadly weapons. They have been easy to steal and then nothing has been able to stop their advance,” she writes in Swedish. “In Nice, Berlin, Jerusalem, London and Stockholm they have been used as effective murder machines for terrorists who wanted to kill many people.”

“If people in the future will be protected, cars must simply removed from the collection sites and city centers.”

“It is not reasonable that a big truck can be driven right into Stockholm’s popular walking street on a Friday afternoon just before Easter,” she continues. “Politicians have been good at protecting themselves, but now they must also ensure citizens’ needs for secure environments.”

Sweden's response to the Stockholm attack:

Nowhere in her piece does Ms. Franchell discuss Europe’s unfolding open borders disaster and its direct correlation to an escalation in terrorist attacks on European soil – she blames inanimate objects instead.

She also failed to mention the jihad component involved in each of the incidents she cites.

She made no mention of the fact that Friday’s killer was an illegal alien from Uzbekistan with ties to terrorist organizations who had been evading deportation after his application for asylum was rejected last year. 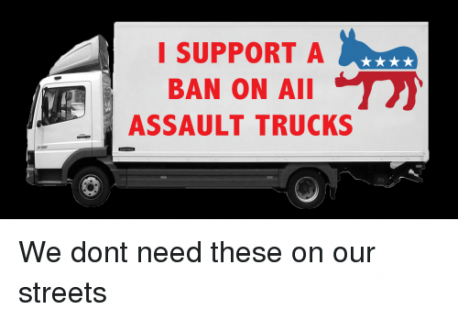 An additional layer of twisted irony can be found in the fact that a heroic security used his own vehicle to prevent Friday’s attack from being far worse – a classic “good guy with a gun stops bad guy with a gun” type of scenario.

“Hundreds of lives were saved by a quick-thinking security van driver who drove his van directly into the path of the rampaging lorry, forcing the terrorist to lose control and crash,” reports the Daily Mail. “He said that his first thought was to protect the Swedish parliament, which was just 500 metres down the road from the scene of the attack.”

Franchell demands that barriers be erected in Stockholm’s streets and the flow of traffic be more heavily regulated – but when it comes to her nation’s borders, those same policies apparently do not fit her agenda.

“There are stops for unwanted cars that can also be folded down for any significant transport… the technology is there,” Franchell says. “The cars have dominated our cities for decades, now it is the people who need space.”

“Now it is cars that must be regulated.”

Aftonbladet took great pleasure in roundly mocking President Trump after he expressed his concern with the escalation of violence and crime in Sweden due to the massive influx of illegal aliens and asylum seekers.

In response to Friday’s bloody terrorist attack, more than 20,000 Swedes threw a “Lovefest” and the future is bright and safe again.