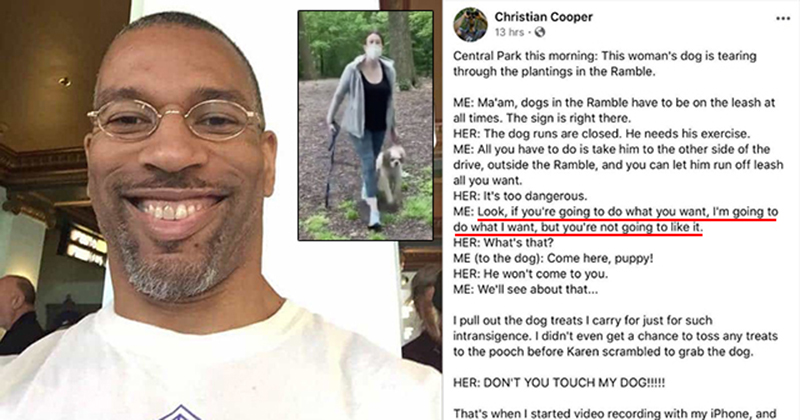 Democrat activist Christian Cooper admitted Monday on Facebook that he threatened “Karen” and her dog before she called police on him.

So he did threaten her dog pic.twitter.com/VYB4mAY7KH

He then pulled out mystery “treats,” which he said he carries “for just such intransigence,” and called her dog to himself.

Christian Cooper, the black man that seemed to try to abduct a woman's dog in NYC, told CNN that he pulled out dog treats specifically because it makes dog owners uncomfortable. "Dog owners hate when a stranger feeds their dog." pic.twitter.com/xg9qKjIrAF

Harrison Smith and Savanah break down the latest battle between two “Karens” caught on video!

He also works for the Democratic Party pic.twitter.com/Mmr3i8Q0iR

Oh, when Karens take a walk with their dogs off leash in the famous Bramble in NY’s Central Park, where it is clearly posted on signs that dogs MUST be leashed at all times, and someone like my brother (an avid birder) politely asks her to put her dog on the leash. pic.twitter.com/3YnzuATsDm

Dogs are like children for a lot of women, if you get between them and their dog it’s normal for them to be fearful and react.

This changes everything about that video. If someone threatened my dog I would do some crazy ass shit too. https://t.co/8bHxba1TWF

For all she knew the hostile man who threatened her was trying to poison her pup with his “treats.”

For her trouble, the woman was fired her job by Franklin Templeton Investments and labeled a racist by the international media.

Here is exhibit A of your investigation posted by the person who filmed the video:

“If you’re going to what you want, im going to do what I want, but you’re not going to like it” pic.twitter.com/3Xj7WVH1UE

Following our internal review of the incident in Central Park yesterday, we have made the decision to terminate the employee involved, effective immediately. We do not tolerate racism of any kind at Franklin Templeton.

Thank you! Finally. Replace her with an African American man.

Amy Cooper, a white woman who called the police on a black man, Christian Cooper, for asking her to leash her dog in Central Park, has been fired by her employer https://t.co/ikbocOFD7j

The video out of Central Park is racism, plain and simple.

She called the police BECAUSE he was a Black man. Even though she was the one breaking the rules. She decided he was the criminal and we know why.

This kind of hatred has no place in our city. https://t.co/6PP7jIwL1g

She also had to surrender her dog to the shelter she adopted it from while the “matter is being addressed”: How rich would it be if they just end up putting the dog down because they couldn’t find another owner?

Regardless, how is this the top story in the country and international news?

Why is an argument between two random people, in a park, on another continent news worthy in Australia?

It’s a top story! This is insane.https://t.co/XJCjGoaHGA

All the media is doing by hyping these “Karen” stories is making white women terrified to call police when they feel threatened by non-white suspects, which can have deadly consequences.

Should “Karen” have had her dog on a leash? Yes.

Should she have called police? Maybe, maybe not.

Does she deserve to have her life destroyed over this and be doxed and inundated with threats on social media? No.

Is the media only focusing on this because it advances their anti-white narrative and drives up racial tensions in advance of the 2020 election? Undoubtedly.

guess which one got more media coverage pic.twitter.com/reBM2RT9eQ