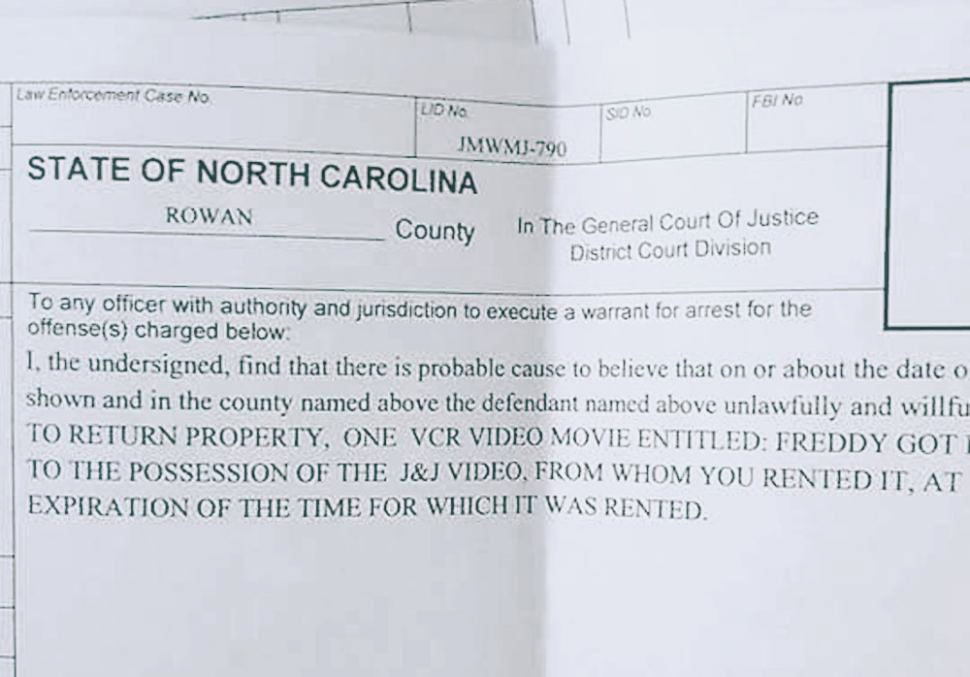 A man in Concord, North Carolina was arrested this week for failing to return a VHS rental from 2002.

James Meyers, who was pulled over by police Tuesday for a broken taillight, says officers informed him of a warrant out for his arrest over a missing copy of the movie “Freddy Got Fingered” from 14 years prior.

“The officer said, ‘I don’t know how to tell you this but there’s a warrant out for your arrest from 2002,’” James told WSCO-TV. “‘Apparently you rented the movie “Freddy Got Fingered” and never returned it.’ I thought he was joking.”

According to the news source, Meyers official charge was “failure to return rental property, a misdemeanor punishable by a fine of up to $200.”

Noticing Meyer’s young daughter in the vehicle, officers allowed the man to drop the young girl off at school before heading down to the police station.

After arriving at the police department, Meyers was shocked further when the seemingly simple issue resulted him being placed in handcuffs.

“For the first time I got put in handcuffs,” Meyers said.

Ironically, the store which rented out the film, J&J Video, was closed for business years prior.

“They’re not focusing on the crimes I think they should be focusing on,” Meyers added. “That hour the cops sat out there with me, the hour and a half I was down in the magistrate’s office could have been spent somewhere else.”

The writer, director and star of Freddy Got Fingered, Tom Green, reportedly reached out to Meyers to lend his support.

“If it’s 200 bucks of course I’ll pay it for him, just for the principle of the thing,” Green told the Daily News.

Watch a scene from Freddy Got Fingered below: