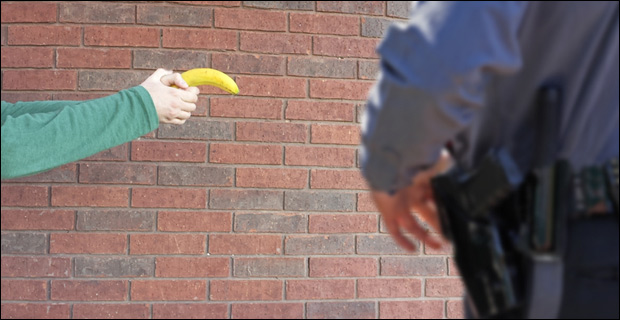 A Colorado man claiming to be a stand-up comedian was arrested after he allegedly pointed a loaded banana at police officers, which evidently caused them to fear for their lives.

The absurd incident occurred on Saturday in Grand Junction. Police approached 28-year-old Nathen Channing after they spotted him walking down the sidewalk waving around a “yellow object.”

“I observed Nathen reach into the left side of his coat with his right hand and pull out a yellow object, pointing it in the air then in my direction as I approached him,” reported ironically-named Deputy Joshua Bunch in the arrest affidavit. “Nathen drew the object in the same manner someone would draw a standard handgun from a concealed holster.”

Upon seeing the ripe fruit, Bunch “immediately ducked into his patrol car and drove away, afraid that Channing had a weapon,” according to 9news.com. “He then called another deputy in the area and warned him of the situation.”

Bunch’s statement goes on to note that the other deputy, Donald Love, “was in fear for his life at this point, and was in the process of pulling out his hand gun when Nathen yelled ‘It’s a banana!'”

When questioned by police, Channing explained that “he does a lot of Youtube” and was perfecting a “funny joke.”

Bunch proceeded to arrest the banana-wielding criminal as he did not witness him filming, despite the man’s claims that he was still working out the nuances of the prank.

“I informed Nathen his reasoning did not make [sense] to me since he did not have anything to post on the internet,” Bunch wrote in the affidavit. “Nathen stated he was just completing ‘trial runs’ of the joke.”

Pressed for further explanation, Channing said he was hoping his video would help “lighten the holiday spirit.”

Regardless of his excuse, and despite the fact that they nearly shot an innocent man to death, police booked the comedian and charged him with felony menacing, meaning he “knowingly” put someone “in fear of imminent serious bodily injury,” according to lawyer Kevin Churchill’s website. “The presumptive sentence for Felony Menacing is imprisonment for up to three years.”

Considering the rise in erroneous police altercations, the prankster is lucky he didn’t get shot.

Last Saturday, police in Cleveland gunned down a 12-year-old boy at a school playground after they mistook his toy BB gun for an actual gun.

Coincidentally, inmates at the Mesa County Sheriff’s Office, where Channing was booked, are made to wear banana-colored jumpsuits.

Contrary to popular belief, a banana is technically a “berry.”