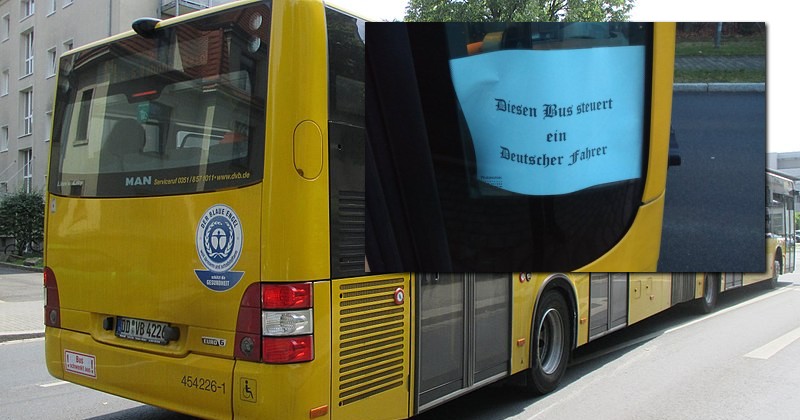 A man in Dresden, Germany was fired for displaying a sign on his bus that read “This bus is steered by a German driver.”

The controversy began when a passenger took a photograph of the sign and sent it to the Dresden Transport Company (DVB) on social media asking what it was.

Thankfully, the bus driver was immediately fired for his thought crimes against diversity and will probably never be employed by a transport company again.

“He is no longer on the road and this behaviour will have consequences,” the company responded.

DVB spokeswoman Anja Ehrhardt subsequently confirmed that the man’s employment had been terminated over a rule that forbids the sharing of political opinions.

“We can under no circumstances tolerate such actions,” Ehrhardt said.

Presumably, if the driver had been displaying a “refugees welcome” sign, nothing would have happened to him and he probably would have been praised on social media.

The subcontractor’s boss, Matthias Peschke, went further, asserting that the man’s thought crime was an affront to decency.

“This is a shocking situation for us. This is a long-term employee of ours. His service has now been discontinued. He won’t be in the plans tomorrow,” said Peschke.

It later turned out that the man probably displayed the sign because he was frustrated with DVB’s attempt to attract migrant drivers to fill vacancies that are not being filled by domestic drivers.

The company recently hired 19 drivers from Serbia despite them lacking in German language skills.

As we reported earlier this year, the former director of Germany’s foreign intelligence service accused Angela Merkel of creating a “security crisis” in Germany as a result of her open border refugee policy.