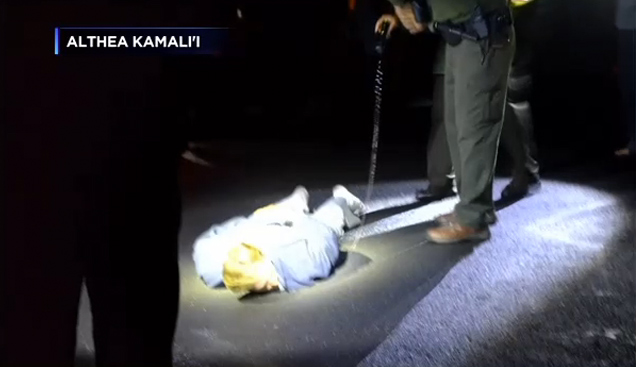 A man operating a miniature toy drone was tased at Hawaii’s Volcanoes National Park Saturday during a brief encounter with a US park ranger.

According to Hawaii News Now, the incident began after drone hobbyist Travis Sanders traveled to the Kilauea volcano with his family that evening to watch a rising lava lake alongside nearly one hundred other people.

Attempting to garner a better view, Sanders sent his 3-inch micro quadcopter drone above the crowd to film the Halema’uma’u Crater.

“My toy has some lights on it so I thought it would be fun to fly it up and down — no big deal, right? Well apparently they’re not allowed there I found out,” Sanders said.

As the drone hovered in the night sky, Sanders was approached by an unknown man who began demanding he bring the toy back to the ground.

“A guy approached me in the dark and said, ‘Bring it down!’ and he was very angry,” Sanders explained. “I had no idea he was a ranger. He sounded very angry, confrontational — like he wanted to fight — and I didn’t really want to stick around for it so I just told him, ‘I don’t have ID and I’m leaving.'”

“The suspect refused to identify himself and fled — not far from the edge of the caldera, which is more than 500 feet,” Ferracane said. “The ranger deployed his taser to stop the fleeing suspect and then arrested the suspect for failure to comply with a lawful order and interfering with agency functions.”

Despite claims by the spokesperson, multiple witnesses say the ranger was clearly out of line.

“Several people who witnessed the situation on Saturday night reached out to Hawaii News Now — most, describing the incident as excessive and unnecessary…” the news report states.

Sanders noted that no signs on the premises mentioned the illegality of drone use, although Ferracane claims their website features the information.

“It’s illegal to fly an unmanned aircraft in all 407 national park units across the United States,” Ferracane said. “That national policy was enacted in August of last year and the reason is for visitor and resource protection and visitor enjoyment.”

“My daughter was crying. She was screaming, ‘Leave him alone! I hate you!’ and she started going after the park ranger guy,” Sanders said. “There was a whole bunch of people going, ‘Don’t worry man, we got it on video. He’s not going to do anything else to you,’ but he kept threatening to tase me again as if I was moving or something and the only thing that was moving was my mouth I was saying, ‘Okay, okay. I’m not moving. I’m not getting up. I’m not resisting you.”

Under Hawaii state law, tasers can only be used if a suspect is showing “active resistance” to a law enforcement officer notes Motherboard, raising even more questions on the ranger’s actions.