As if you needed another reason not to shop at Walmart…

An Arizona man was recently handcuffed and banned for life from the Chinese slave labor retail outlet known as Walmart for doing something Americans do on a daily basis – price matching.

Joe Cantrell loves his local San Tan Valley Walmart, but he thinks their “already low prices” could be even lower.

“I just love Walmart and that’s why I go,” Cantrell proclaimed to ABC15.

That’s why last week, when he went in wanting to get the best deal, he was surprised to get kicked out of the store.

Cantrell was buying ornaments for his family’s Christmas tree, and as usual he went to the customer service counter to match some prices, something Walmart’s website claims the store “gladly” does.

However, when the customer service associate told him he couldn’t match prices, Cantrell, who had in the past performed numerous price matches with no difficulty, became understandably irate – and he let management know. 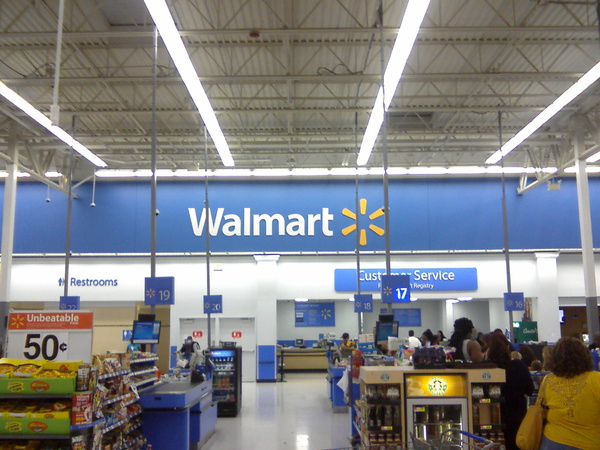 “When I left, he turned around and called the Pinal County Sheriff’s Office and said he felt intimidated and threatened. I was upset, but never once did I say anything to the gentleman,” Cantrell said.

He left the store and returned four days later. Pinal County Sheriff’s deputies were apparently waiting for him, and handcuffed him before handing over a court summons “and a notice banning him from any Walmart in the world for life,” according to ABC15.

“I was handcuffed, humiliated and embarrassed in front of everybody at Walmart,” Cantrell recalled.

“I felt shamed. I felt like I was the bad guy. And I know I’m not a bad guy,” Cantrell stated, noting that he’s one of the retail chain’s most loyal customers, sometimes visiting the store two or three times a day.

Police sympathized and opted not to haul him to the slammer, although he still faces charges of threatening, intimidation and disorderly conduct.

However, Cantrell was likely more calm than the hordes that infested Walmart this past Black Friday. The company ejected customers for doing little more than filming the holiday feeding frenzy, but refused to prosecute shoppers who violently threw people aside in efforts to secure discounted merchandise.

Banning people outright is something Walmart – a notable Department of Homeland Security partner which has helped promote their Orwellian “See Something, Say Something” snitch campaign – seemingly does on a regular basis when dealing with “problem customers.”

Last August, an Infowars employee was “banned for life” from the store after he walked out refusing to show his receipt to a non-uniformed loss prevention employee. The Walmart worker chased our co-worker into the parking lot, phoned police for help, then proceeded to claim that the Infowars employee would be blacklisted from ever procuring a security job.. anywhere.

“If we see you in the store, if we get you on camera, you get arrested. Class B Misdemeanor,” the control freak employee stated. “Yes, your information is gonna go in our system. And anybody, all the Fortune 500 companies, everybody. Anywhere you try to get a job, is going to see that you were trespassed at Walmart. This means you will never get a security clearance anywhere at any job.”