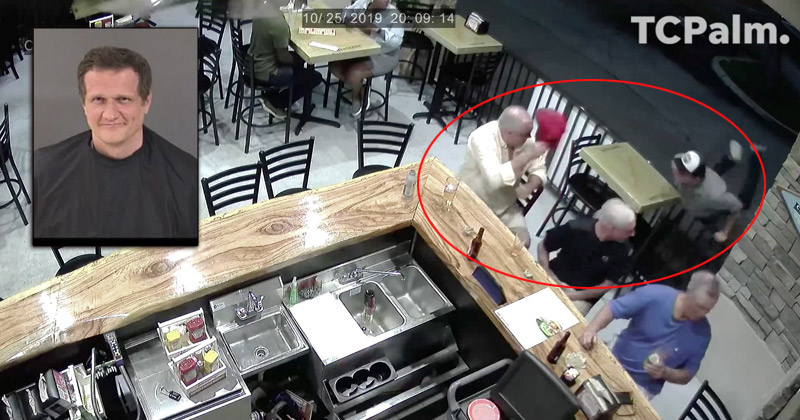 A Florida man was sentenced to 90 days in jail for spitting on a bar patron who was sporting President Donald Trump’s trademark “Make America Great Again” hat.

On Thursday, a 19th Judicial Circuit Court judge ordered 43-year-old Matthias Ajple to serve up to three months in jail and one year of supervised probation after he was found guilty on battery charges for spitting on 67-year-old Robert Youngblood.

The incident, which took place October 26, was caught on surveillance inside the Hurricane Grill & Wings restaurant in Vero Beach.

Video shows Ajple placing a napkin on Youngblood’s head and hitting the man’s red baseball cap, before he walks out of the business and loops around to spit on him.

The Treasure Coast Palm reports when deputies encountered Ajple’s wife, she confessed she had encouraged Ajple to go up to Youngblood and tell him, “Go back to Russia.”

According to Indian River County Sheriff’s Office deputies, the attacker also was not remorseful over the act, and claimed he spit on the man because he was “trying to protect” the deputies and because “Trump supporters are communist.”

“I was just trying to protect you guys because I support law enforcement. Trump supporters are communist and racist,” Ajple stated. “I don’t even care that I’m going to jail; this is actually exciting.”

“Plus, I have more time on this earth than he does anyway; he probably feels so good about himself,” he added, referring to Younblood’s age.

Judge David Morgan also ordered Ajple to pay Youngblood $155, in addition to paying his court costs, and also issued a temporary restraining order against the aggressor.