Election officials ejected a Texas man from a voting booth because he was wearing a Second Amendment t-shirt. 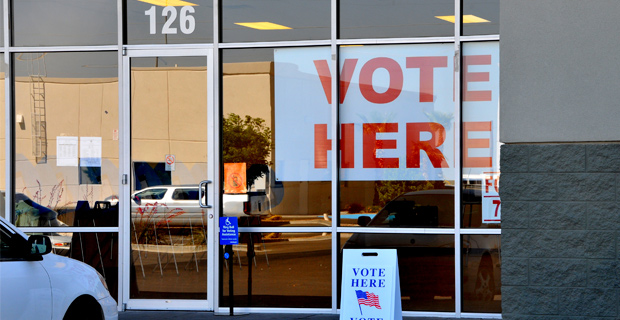 Chris Driskill was prevented from voting at the Waller County Courthouse on Tuesday after officials claimed he was violating Texas Election Code section 85.036, which states that “a person may not electioneer for or against any candidate, measure, or political party” in or within 100 feet of a voting location.

“I heard a gentleman’s voice over my shoulder say ‘he can’t vote with that shirt on. You’ll have to either turn it inside out our you’ll have to leave,’” Driskill told KVUE.

The officials used the election law to throw Driskill out of the voting booth even though the shirt simply stated “Second Amendment – 1789 – America’s Original Homeland Security” on the front without any mention of a political candidate or proposition.

This is simply an attack on free speech and voting rights through the color of law as well as another example of the continued demonization of gun owners across America.

Last year in West Virginia, a 14-year-old was arrested for refusing to remove a Second Amendment t-shirt.

The incident began at Lincoln Middle School when a teacher told Jared Marcum to take off a NRA t-shirt, despite the fact that the school’s dress code only banned images featuring “profanity, violence, discriminatory messages or sexually suggestive phrases.”

And in a very prominent incident, the National Football League rejected a pro-gun Super Bowl advertisement by Daniel Defense which depicted a Marine arriving to greet his family with a voiceover stating “no one has the right to tell me how to defend them.”

Despite the fact that the commercial did not feature “firearms, ammunition or other weapons,” which are banned per NFL advertising guidelines, the NFL still excluded the ad.

“According to these guidelines,” wrote Guns & Ammo, “Daniel Defense’s Super Bowl commercial does not violate for two reasons:

• Daniel Defense has a brick-and-mortar store, where they sell products other than firearms such as apparel.

• The commercial itself does not mention firearms, ammunition or weaponry.”

All of these attacks on gun ownership tie into the broad agenda to brainwash people into accepting gun control, as described by Attorney General Eric Holder in 1995.