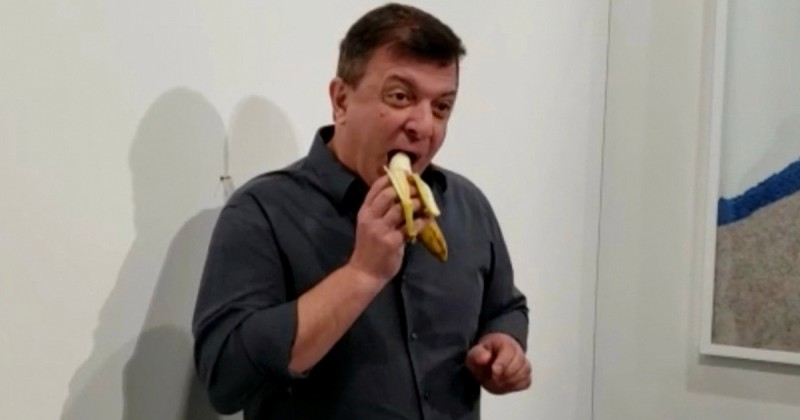 The man who ate an ‘art’ piece that consisted of a banana duct-taped to a wall says he did it to “create art.”

As we previously highlighted, the fruit-based exhibit sold for $120,000 at an art fair in Miami, Florida.

Gallery owner Emmanuel Perrotin dismissed criticism that the piece was a joke, claiming that the shape of the fruit and the angle it has been fixed with duct tape to the wall gives it meaning.

Within days however, it was scoffed by David Datuna, (before subsequently being replaced with scrawled writing which read ‘Epstein didn’t kill himself’).

“It wasn’t vandalism, it was art performance from me and absolutely I am not sorry,” Datuna said during a press conference.

You can tell if a society is collapsing when stuff like this becomes prevalent. https://t.co/gKQVEiQaXx

“In this case, it’s not like I ate art,” he added. “Like the gallery said, it’s not a banana, it’s a concept. And I just ate the concept of the artist. So I think this is cool, this is fun, this is what art is about.”

Datuna, who called his performance ‘Hungry Artist’, gave all his information to police but doesn’t believe he will be charged with any crime.

Datuna has succeeded in underscoring what we already knew – most modern conceptual art is talentless trash.

If everything can be considered art then nothing is art.

In reality, as I explain in the video below, objective standards of beauty do exist and in a world of nihilistic relativism need to be re-asserted more than ever before.