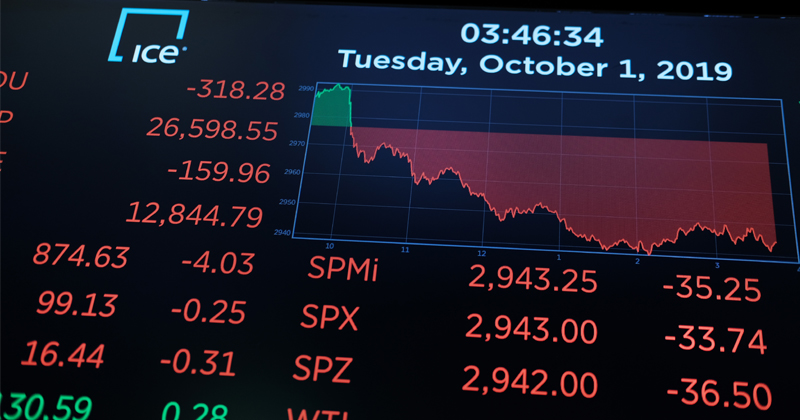 US stocks fell by more than 300 points on Tuesday following the worst report on US manufacturing from the Institute for Supply Management (ISM) in a decade.

The Tuesday report from ISM, the world’s oldest and largest supply management association, found that economic activity in the US manufacturing sector continued its slowdown in September from the previous month, falling to the lowest level since June 2009, at the tail end of the Great Recession that gutted the US financial industry.

When the report dropped Tuesday morning, US stocks immediately fell from their early gains, with the Dow Jones Industrial Average (DJIA) falling by nearly 200 points. The DJIA continued its slide throughout the day, ending around 343.79. Other stock indices fell similarly, with the Nasdaq declining by 90.65 points and S&P 500 by 36.49.

“This is serious,” Torsten Sløk, chief economist at Deutsche Bank Securities in New York, told Reuters Tuesday morning. “There is no end in sight to this slowdown, the recession risk is real.”

The price of gold is an accurate indicator about the state of the global economy.

August was a rough month for US stocks, which by mid-month had contracted almost 7%. August 14 registered the fourth-largest point drop on record for the Dow, which collapsed more than 800 points amid discovery of an “inverted yield curve” in US savings bonds. A situation in which the yield on short-term bonds exceeds the yield on longer-term bonds has preceded every economic recession in modern history, Sputnik reported.

Naturally, US President Donald Trump blamed Tuesday’s downturn on the Federal Reserve’s lukewarm disposition toward his perennial solution to economic problems: slashing the federal funds interest rate, which governs the payback percentage banks are obliged to pay for overnight loans.

As I predicted, Jay Powell and the Federal Reserve have allowed the Dollar to get so strong, especially relative to ALL other currencies, that our manufacturers are being negatively affected. Fed Rate too high. They are their own worst enemies, they don’t have a clue. Pathetic!

On Monday, the US dollar was trading at its highest levels in two years, boosted by market instabilities around the world caused by ongoing protests in Hong Kong and the recent attack on two Saudi Aramco oil facilities, Sputnik reported.

However, Market Watch noted that economists place the majority of the blame for the downturn on the ongoing trade war with China, rather than interest rates that may or may not be too high.

The Fed last lowered interest rates on September 19, with the Federal Open Market Committee citing weakening exports and business investment, as well as the recent tariff hikes, as reasons for the move.

The two nights before the rate slash, the Fed found itself injecting tens of billions of dollars into US banks, which suddenly found themselves short on cash – the first time it’d been forced to hold an auction in a decade, according to the Wall Street Journal.

Economic Terrorism! MSM Tries To Crash US Economy; Sides With China Against US

Alex Jones breaks down the economic terrorism of the Chinese and how the American mainstream media have chosen to back the ChiComs over the American people.