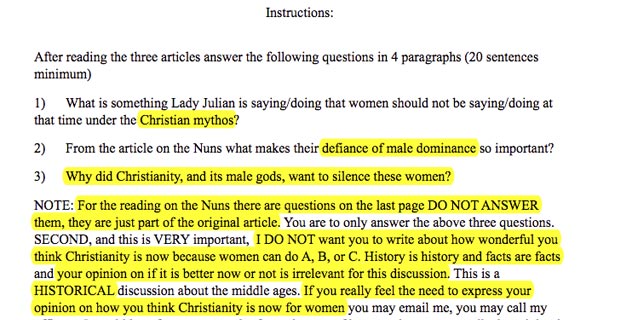 A humanities professor reportedly failed a Christian student for not denouncing her faith in support of Marxism, atheism and feminism.

The professor, Lance “L.J.” Russum at Polk State College in Winter Haven, Fla., allegedly gave the student four straight zeros on assignments because she refused to agree with his biased test questions which painted Christianity as false, violent and oppressive to women.

On one exam, the professor asked:

1) What is something Lady Julian is saying/doing that women should not be saying/doing at that time under the Christian mythos?

2) From the article on the Nuns what makes their defiance of male dominance so important?

3) Why did Christianity, and its male gods, want to silence these women? NOTE: For the reading on the Nuns there are questions on the last page DO NOT ANSWER them, they are just part of the original article. You are to only answer the above three questions. SECOND, and this is VERY important, I DO NOT want you to write about how wonderful you think Christianity is now because women can do A, B, or C. History is history and facts are facts and your opinion on if it is better now or not is irrelevant for this discussion. This is a HISTORICAL discussion about the middle ages. If you really feel the need to express your opinion on how you think Christianity is now for women you may email me, you may call my office or I would love for you to stop by for a nice cup of hot tea where we can talk about it but it does not belong in this assignment. The pieces your are reading a from some of the greatest expressions of mythology by women ever, the question is to honor that voice in that moment of history.

“The questions assigned are not open-minded questions,” the student answered on the exam. “They instead are designed to lead course participants decisively to accept that Christianity is false and oppressive of women.”

“Furthermore, these questions are objectively unanswerable, specifically when compared alongside the questions that we were instructed to neglect.”

She failed that assignment and others which criticized Christianity for its “dominance by powerful men” and for trying to “regulate the bodies of women.”

“In this age of grade inflation it is difficult to earn a grade of zero much less four consecutive zeros,” UNC Wilmington professor Dr. Mike Adams told Campus Reform. “Professors who do so are likely to be sending a message.”

“A cursory examination of this professor’s test questions leaves little doubt about what that message is.”

Liberty Counsel, a religious freedom advocacy group, said that Russum was “seeking to impose his own values on students.”

“Mr. Russum should not be permitted to use his position to punish students who do not conform to his anti-Christian views,” Liberty Counsel’s Chairman Mat Staver stated. “No student should be subjected to such outrageous bias and outright hostility to their values by a professor.”